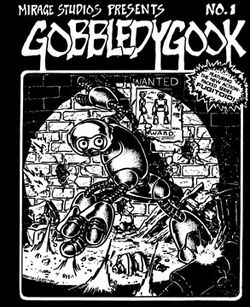 Gobbledygook was the inaugural publication from Mirage Studios, released in 1984. Although it does not contain any Teenage Mutant Ninja Turtles stories, it is the first appearance of Fugitoid and related characters, and features an advertisement for Teenage Mutant Ninja Turtles #1. Because of this advertisement, many publications consider this magazine to be the Turtles' first appearance; however, Mirage has always maintained that TMNT #1 is their actual first appearance. Nevertheless, legitimate copies of the book are highly sought-after by TMNT collectors due to its historic status.

Included in this issue:

Retrieved from "https://turtlepedia.fandom.com/wiki/Gobbledygook_issue_1?oldid=342648"
Community content is available under CC-BY-SA unless otherwise noted.