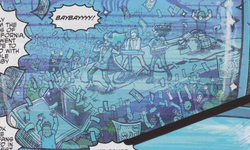 Glamourshok is a rock & roll band who formed in San Tortuga, California in 1990, as detailed in their history in "Relics of Rawk", a behind-the-scenes of music legends that the Ninja Turtles watch in Instru-Mental. Their hit single was called "Babybabybabybaby".

Glamourshok's fame tanked, however, after they starred in a box-office bomb titled "First Grade Fireman".

Retrieved from "https://turtlepedia.fandom.com/wiki/Glamourshok?oldid=480387"
Community content is available under CC-BY-SA unless otherwise noted.