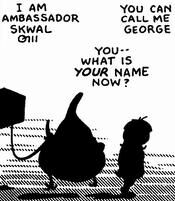 "George" is the alias assumed by the ambassador of the InvasoSkwals aliens in TMNT (Vol. 1) #22. In the future year of 1995, Dale Evans McGillicutty returns from her trip to the past in her time machine. She’s greeted by a large blob-like creature and immediately tries to flee. The creature freezes her with his Zaz Gun and says that he came for her help. He says that he is ambassador of the Skwal aliens, and after initially saying his true name (which doesn't use English letters, looks kind of like GIII) tells Dale to call him George.

George tells Dale that the Skwal are a race of monitor aliens who try to keep less advanced creatures from destroying themselves. However, Earth came to their attention too late and they've no way of preventing mankind from destroying itself with pollution and war. George says that there are still a few hours before the timeline resets and Dale’s time machine vanishes. He asks that she go back in time 2 million years and make life more comfortable for the first homo habilis, that way mankind will never have to invent violence.

Upon returning to 1995, George greets her with the news that the timeline is resetting itself exactly as planned; dictators are turning into poets, pro wrestlers are turning into botanists and so on. George exclaims that in a little while, all weapons and notions of violence will cease to exist on Earth… making the planet ripe for Skwal conquest.

In Totally Hacked!, Dale confronts George of the Skwal. George tells Dale that she’s made a grievous error in defeating the aliens by restoring the timeline, but Dale simply shoos him back into his spaceship.

Retrieved from "https://turtlepedia.fandom.com/wiki/George?oldid=471466"
Community content is available under CC-BY-SA unless otherwise noted.