Genghis Frog is a member of the Punk Frog clan, and due to his action figure being released first, arguably the most well-known. He is named after the Mongol conqueror Ghengis Khan. 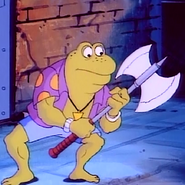 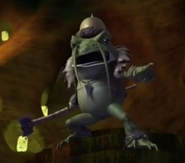 Genghis Frog
2012 TV series
Add a photo to this gallery

Genghis Frog
1989 release
Add a photo to this gallery
Retrieved from "https://turtlepedia.fandom.com/wiki/Genghis_Frog?oldid=479117"
Community content is available under CC-BY-SA unless otherwise noted.