As unstoppable as a landslide, General Traag, leader of Krang's Rock Soldier armies in Dimension X, has one thing on his tiny mind — demolish Turtles. Summoned by Krang to exterminate the Turtles and prepare the way for an invasion from Dimension X, General Traag is grinding like a glacier over everything in his path.

This stone-cold killer digs through solid rock with his Anti-Turtle Combat Knife looking for Turtles. In a battle of wits, he may be unarmed but beware of his Laser Blaster. You are in for a shock should you end up on the wrong end of this atom smasher. Traag's Stunlaser gun leaves his enemies dazed, dopey and defenseless — perfect for Turtle shish-kabobs or as victims for Krang's diabolical schemes. 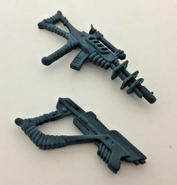 1994 carded reissue
Add a photo to this gallery
Retrieved from "https://turtlepedia.fandom.com/wiki/General_Traag_(1989_action_figure)?oldid=532842"
Community content is available under CC-BY-SA unless otherwise noted.