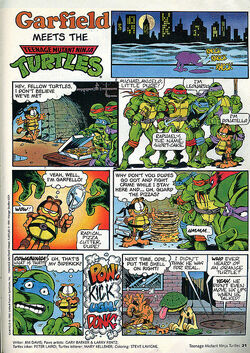 Garfield approaches the sewer dressed as a Turtle, and introduces himself to the Ninja Turtles as "Garfello", brandishing a pizza cutter. He suggests the Turtles go out on patrol while he guards their pizza, in an obvious ploy to sneak the food for himself. The Turtles hear some noise, and Garfield indicates that it is his sidekick. The Turtles kick Garfield out of their lair, realizing he's not a real Turtle. Odie is seen wearing a turtle shell on his head.

This comic was written by Jim Davis, creator of Garfield, and the Turtles were inked by Peter Laird. Gary Barker and Larry Fentz provided the art, whilst Steve Lavigne provided colors and Mary Kelleher provided lettering.