Gabrielle Jones was briefly the wife of Casey Jones and the mother of Shadow in the Mirage series. Not much is really known about her, including her last name. She met Casey as a waitress after he left New York to get over his rejection from April. She was affectionately called "Gabe" by him. In the Image continuity, this was retroactively changed to "Gaby".

Gabrielle was a café employee at the "Graham’s Goodtime Grill" in Goat Head, Colorado.

It was after frustrations with April that Casey wandered to meet her in her café. After a scuffle with car thieves in the café’s parking lot in which he got beat up, Gabrielle let Casey stay with her in her trailer home. It's never known if they had a one night stand or she just let him sleep the first night. But Casey would awake to Gabrielle throwing up to which she tells him that she's four months pregnant with the child of another man, apparently long since gone.

Gabrielle feared Casey would become upset and leave her. Instead he stays and over time the two fall in love. He would later propose to her, at which she gladly accepts. The two couldn't afford a real wedding so they were married by the Justice of the Peace. Casey did try to make up by making a lovely tropical like landscape for their honeymoon.

But Casey's joy would be taken away too quickly. Gabrielle died giving birth to Shadow. Gabrielle apparently had no other living family, so Shadow was given into Casey's custody. Gabrielle's body was cremated and Casey had her ashes spread in the canyons, tearfully telling her good-bye.

Gabrielle's spirit is seen briefly at the end of Tales of TMNT (vol 2) #15, after Casey takes Shadow to visit the site where he spread her ashes. Shadow builds a small memorial to her mother and as they leave she's seen smiling at her daughter and husband from a cliff. 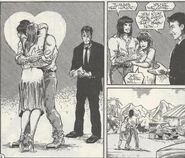 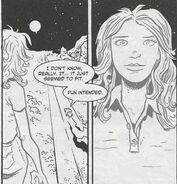