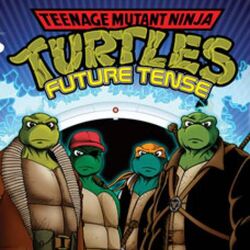 Futuristic versions of the Turtles from a possible future, these Ninja Turtles exist in a time where their father Master Splinter has died and the earth was flooded due to global warming. Despite these events, the Turtles would go on to live separate and successful lives. This is seen in Donatello who has gained incredible wealth selling his inventions, particularly his upgraded version of Baxter Stockman's Mouser in order to take care of the rat problem. With Donatello's resources he was able to outfit himself and his brothers with high-tech armor.

Retrieved from "https://turtlepedia.fandom.com/wiki/Future_Mutant_Ninja_Turtles_(Archie)?oldid=512813"
Community content is available under CC-BY-SA unless otherwise noted.