"Fungus Humungous" is the tenth episode of the second season of the 2012 TV series, and the thirty-sixth episode overall in the series. It first aired on February 16th 2014.

A fungus mutant spreading through the sewers causes the Turtles, Casey and April to experience their worst fears. Leonardo must face his greatest fear, losing his team, in order to save the city.

The episode begins with Casey and April sitting on a random bench in the middle of New York City listening to music. April tells Casey that she enjoys having a true friend who knows about the existence of the Turtles. Casey agrees and responds that four Turtles living underground with a rodent master is something that no one could make up. The two then wait until the coast is clear and decide to go down into the sewer to pay a visit to the Turtles, but when they get down there, an extremely noxious smell (not the sewage) ends up catching their attention. Suddenly, a sewer maintenance man appears out of nowhere and runs right past April and Casey, screaming "SQUIRREL!! GIANT MUTANT SQUIRREL!'' The two then follow the terrified man around a nearby corner, but find that he has completely disappeared. Then, April hears something rather strange and before she knows it, something blows what seems to be a type of powder directly into her face. She then glances at Casey and glimpses that his face looks like a bat's face! Mortified, she walks in the opposite direction and suddenly sees what appears to be her mutated father standing there in her tracks!!!

Casey is utterly bewildered by April's strange behavior – and he quickly goes to inform the Turtles of this (as April is seemingly reluctant to come along with him). Meanwhile, in the lair, Splinter and Leo are in deep meditation. Splinter has no trouble whatsoever in doing so (as per usual), but Leo is having quite a bit of trouble, due to some recent nightmares that he's been having about his brothers being dragged off into pure darkness and him being powerless to help. Splinter tells him that losing one's team is a common fear that almost every single leader must face here and there. Casey then enters the lair and tells all of them of April's very odd attitude. When Casey says that he does not know exactly where he left her, Donnie begins chastising him, but the two (luckily) are quickly able to break up their little squabble... So, the team heads out into the sewers to find April. However, the same thing that stunned April soon stuns Casey as well - and this very same thing provokes his absolute greatest fear as well - rats. And tons of them start appearing in his hallucination and begin engulfing Casey himself, much to his own dismay. This time, it is the Turtles who are utterly baffled. While Casey becomes increasingly frantic, Donnie rounds a corner and spots a still horrified April, who is also still hallucinating that her mutated bat father is there. Donnie tries to calm her down, but to no avail whatsoever. The Turtles then come to the realization that Mutant Mushrooms have been the perpetrators of all this turmoil!

One then appears and attaches itself to Mikey's face, and from that point on, the four brothers do the very best they can to dispose of the little pests, but one manages to spray Raph with the very same stuff that caused Casey and April to become terrified - and thus, Raph does as well. He hallucinates Leo as Chong (the Spy-Roach) and, creating a vow to eliminate the repugnant roach, he quickly jumps into the air and mistakenly is about to harm Leonardo! Leo dodges out of the way, however, and Raph lands hard on the ground. Mikey then wraps his nunchakus around his now extremely mortified brother - and is actually able to contain him for a brief moment.

Back in the lair, Donnie swipes some of the stuff that the mushrooms spewed off of April - and he makes a major yet odd discovery - The stuff that the mushrooms have been affecting April, Casey, and Raph with what are actually toxins that are part of the mushrooms' natural defense mechanisms. But, for some weird reason, they seem to make people experience their worst possible fears... The team then goes back out into the sewers to try and prevent the mushrooms from reaching the numerous city streets. They keep walking until they get to an area where a little 'army' of mushrooms begin attacking them and they spray Mikey. Coughing, he accidentally trips over one of Raph's legs and they both freak out at the sight of one another when they get back up (Raph sees Mikey as Spy-Roach, and Mikey sees Raph as a squirrelanoid).

Then, Donatello is sprayed by the substance and begins hallucinating that April (with a demon-like appearance) mortally hates him and is calling him a freak over and over again. Everyone then rapidly leaves the area, leaving Leo completely abandoned. However, he is sprayed as well. Then, he begins hallucinating that his former favorite character from Space Heroes (Captain Ryan) is slapping him and scolding him because of his utter failures in life - His failure to protect his brothers... He then imagines his own brothers admonishing him about this very failure. He tries to snap out of it, but this does not work. Then, even more mushrooms appear and gather in a single file line and start to slowly surround Leo. Two of them soon fly up and squirt the same substance into his face yet again, which causes him to slip and fall off of a nearby edge. He soon lands in an unknown place, but, luckily, is completely uninjured. He quickly gets himself back up, and sees a gigantic figure standing nearby - This gargantuan mushroom has one huge eye protruding from the center of it's "head" and the creature can also seemingly speak.

It quickly orders all of it's "mushroom spawns" to cause more and more fear within Leo - and sure enough, Leo becomes even more increasingly fearful, frantic, and conscience-stricken. However, he is actually able to snap out of it momentarily and slice many of the attacking mushrooms in half. When he becomes fearful yet again, he instinctively remembers what Master Splinter had told him earlier. Thus, he grabs his two Katanas, presumably destroys the gigantic mushroom by letting a considerable amount of sunlight into the room (using one of the bizarre exploding eyes used by the mushroom), and then snaps out of his trance with relative ease. Meanwhile, the other Turtles, April, and Casey snap out of it as well, but only due to the fact that "Fungus Humungous" was destroyed – and that itself apparently caused a chain reaction, in which all of the other fungi were destroyed as well...

The others soon find Leo lying on the ground, seemingly unconscious, but he quickly wakes up and Raph proceeds to thank him for saving every single one of their lives - however he did it exactly. They then head back to the lair and joyously discuss their triumph. Leo tells his Master Splinter about everything that he did, which causes his sensei to ask him if he mastered his fear. Leo responds that he just faced it and Splinter tells him that that is what makes him a great leader. Meanwhile, Mikey brings out a 'victory Antonio pizza', with pepperoni, anchovies, and extra mushrooms - which obviously disgusts all of them and they leave the area. However, Mikey has no concern over this and lifts up a slice to examine it, noticing that there is a mushroom on it that is MOVING (or dancing). 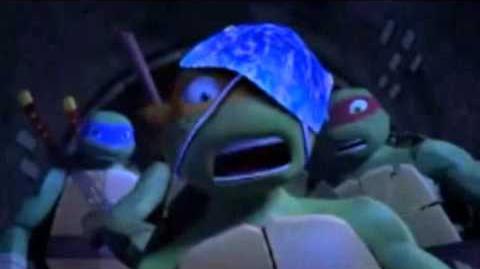 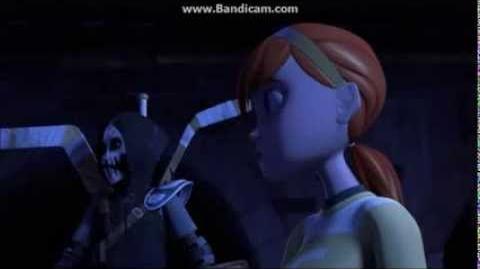