With Exclusive Space Mikey Figure! The Fugitoid Ship is a 2015 Dimension X toy, released together with a Michelangelo action figure.[1] It is based on Zayton Honeycutt's spacecraft the Ulixes from season 4 of the Nickelodeon series.

In Dimension X, the Fugitoid’s fast-flying spaceship is the only one capable of out-maneuvering the Triceratons’ furious assault. Mikey is at the controls of the Space Speeder and is pushing the engines to full, streaking like a shooting star into the epic final battle. Can he fracture the Triceraton Armada and save Earth from total annihilation? 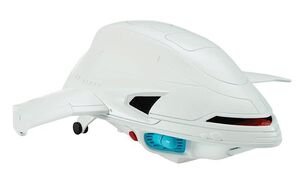 Retrieved from "https://turtlepedia.fandom.com/wiki/Fugitoid_Ship_(2015_toy)?oldid=512093"
Community content is available under CC-BY-SA unless otherwise noted.