Issue #8 of the first Teenage Mutant Ninja Turtles Micro-Series, published in September 2012 by IDW Publishing. This issue centers on Chet Allen, whose real name is Professor Honeycutt, also known as the Fugitoid.

Two years before the current events in the ongoing series: Professor Honeycutt, a Neutrino scientist, is testing a new invention using another one of his inventions, the SAL (Simulated Anthropomorphic Lifeform). By plugging into SAL, Honeycutt's consciousness controls the robot as if it was his own body. Although still enthusiastic about his research, Honeycutt was beginning to become doubtful about the ethics of working for General Krang, even though he didn't have much choice in the matter, as he was conscripted into service. Honeycutt finds Krang communicating with Baxter Stockman of StockGen Laboratories on Earth and reports the outcome of his test on the new titanium alloy he designed for Krang's Technodrome. Honeycutt mentions that the alloy could revolutionize medicine, manufacturing, and space exploration, among other things, but Krang cuts him off, saying that their research is solely for the purpose of Krang's war.

At home that night, Honeycutt again doubts the morality of working for Krang when he and his son Ely are stargazing and his son asks him if he's going to help Krang conquer them all. Honeycutt talks to his wife, Marra, who urges him to consider going to meet some rebels who could get them away from there. Honeycutt is nervous, because he knows Krang would stop at nothing to hunt him down if he were to flee. Marra convinces Honeycutt that they have to do what is right.

Honeycutt deletes all the files on his computer and packs his things, SAL among them. He and his family head to a rendezvous point where they meet up with members of the Neutrino Resistance Fighters. A few months later, and Honeycutt has gotten into the swing of things, working to help keep the resistance's technology on par with General Krang's. He's working on an interdimensional portal to allow travel to Earth but is still having some problems with getting the portal to work more than sixty percent of the time. A resistance leader, Felix, is frustrated by the slow progress, telling Honeycutt that they do not have the luxury of extended periods of testing, when an explosion echoes throughout the building. Krang has found them and began to attack. Honeycutt sets out to get his family, but the living quarters have been locked down due to automatic safety protocols in case of attack. To get to the override controls, he has to go through a section of the building that's on fire, so he has to use SAL. He knows that doing this will cost him his body. Honeycutt is able to get to the control center and override the security lockdown, opening the doors and allowing all the Neutrinos to flee to safety. Unfortunately, Sergeant Granitor radios in to Krang that the Neutrinos are escaping and an airstrike is called in, killing most of them, including his wife and son.

Honeycutt, distraught at the loss of his family and most of the other Neutrinos, at first wants to attack Granitor and the other Stone Soldiers, but he knows that they would overpower him and then there would be no one to stop Krang. Honeycutt knows his best chance at escape is through the portal. Luckily, it works, and he makes it through into Times Square in New York City, followed by the Stone Soldiers.

Eighteen months before the current events in the ongoing series: General Krang is reporting to Baxter Stockman that he is looking for a fugitive android, "the Fugitoid," and orders Stockman to have his employees keep an eye out. Chet Allen, one of Stockman's top employees, laughs at the contraction of "fugitive" and "android" into "the Fugitoid."

Present day: Honeycutt, the Fugitoid, has been in New York City for over a year and a half. He spent the first few months mourning his family and his people and coming to terms with being trapped in his creation. The one thing that kept him sane was knowing that it was up to him to thwart Krang. To that end, Honeycutt meets with some people he thinks will be able to help. He morphs from robot form into an inconspicuous human form, none other than Chet Allen. In a flashback, we see Honeycutt practicing his new persona Chet Allen to get his job at StockGen, where he was able to continue his research and keep an eye on Krang with no one the wiser. He also reached out to Krang's other enemies as he knew he would need help to reach his goal. As he approaches the man he is to meet, Honeycutt wonders how many compromises it is alright to make in the pursuit of the destruction of evil. He is brought before the man in question: the Shredder of the Foot Clan.

Cover A by David Petersen.

Cover B by Paul McCaffrey.

Cover RI by David Petersen.
Add a photo to this gallery 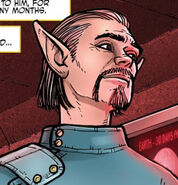 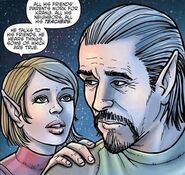 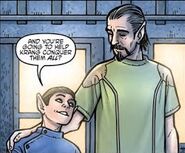 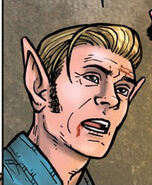 Retrieved from "https://turtlepedia.fandom.com/wiki/Fugitoid_(IDW_issue)?oldid=429015"
Community content is available under CC-BY-SA unless otherwise noted.