Frankenstein's monster, often (incorrectly) referred to only as Frankenstein, also known as Frank, Frankie or Franken, is a main figure from the novel Frankenstein; or, The Modern Prometheus, published for the first time in 1818, by Mary Shelley. During the 20th century this novel was adapted into some of the most famous monster films ever. 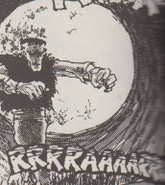 Frankenstein's Monster
Archie Comics
Add a photo to this gallery

Frankenstein's Monster
2012 TV series
Add a photo to this gallery

Retrieved from "https://turtlepedia.fandom.com/wiki/Frankenstein%27s_Monster?oldid=577561"
Community content is available under CC-BY-SA unless otherwise noted.