The story opens with a parable about a retainer for the governor of Kai, who shot noisemaker arrows at a fox he came across. One hit the fox in a back leg, and it dove into the brush. The retainer went to retrieve the arrow, and the fox appeared in front of him, but vanished again before he could shoot at it once more.

On his way home, he saw the fox carrying a flaming brand in its mouth. It reached his house and turned into a human, setting his house on fire. The retainer was about to shoot at her, but the human changed back into a fox and got away, while his house burned down.

Leonardo, Michelangelo, and Raphael stand in horror as they witness Kitsune piercing Splinter's chest with a dagger. Michelangelo leaps into action and begins strangling Kitsune with his Turtle Line. Leo and Raph take on the mind-controlled Foot Ninja, while Jennika desperately tries to hold off Alopex, who is also under Kitsune's spell. Leo tends to Splinter, who was wearing kevlar at Leo's insistence and thus survived the stabbing.

Michelangelo requests help with his fight, but Kitsune tags Raph with her brainwashing and he cuts Michelangelo's line with his sai. Mike falls under the spell as well and hits Leo. She attempts to get Leo and Splinter with her magic, but they resist, and she instead sends Raph and Mike after them.

As Jennika and Alopex continue to fight, Aka approaches April in the Foot's library with one of her feathers and tells her to help her friends with a spell.

Leo fights Raph, while Splinter easily takes down Mikey. Seeing that Raph is overpowering Leo, he does the same to Raph. Donatello suddenly appears from a portal, and is instantly taken over by Kitsune. Splinter takes him on while he tells Leo to help Jennika.

Alopex has beaten Jennika, and Leo approaches and briefly breaks Kitsune's hold on Alopex. Kitsune strengthens her hold, however, but forcing to see Leonardo as a bear. Leo takes her out, and Splinter knocks out Don.

As Leo, Splinter, and Jennika face off against Kitsune, April appears from behind her and casts the spell Aka gave her, while holding the feather. The mind control is broken, and Kitsune flees. Rat King briefly shows up to taunt his sister for interfering, and Jennika notes that Alopex is gone.

Kitsune approaches the Foot helicopter with Oroku Saki's body inside, and she forces the occupants to do her bidding, her mind control having returned. She opens the coffin, but find that Saki's helmet is inside, but without the skull, which Splinter is revealed to have kept. 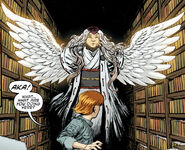 Add a photo to this gallery
Retrieved from "https://turtlepedia.fandom.com/wiki/Fox_Hunt,_part_2?oldid=566716"
Community content is available under CC-BY-SA unless otherwise noted.