Footbot Soldiers, also known as Foot-Bots, Foot Robots, or Robotic Foot Soldiers, are the mechanical versions of the The Shredder's minions built by the Kraang Hive Mind in collaboration with Shredder to strengthen the Foot Clan. 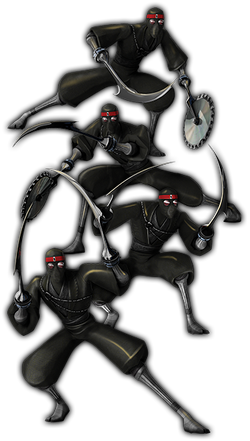 These enhanced versions of their human counterparts in the Foot Soldiers were built by the Kraang Hive Mind and the Shredder, due to the fact that the ordinary human Foot Soldiers were being defeated by the turtles too easily. As far as the robots' appearance goes, they are dressed exactly the same as the regular Foot Soldiers and so, if they stood side by side, the two would be almost impossible to differentiate between. While in combat with skilled opponents like the Turtles, they are not much more capable than the original Foot Soldiers, one of these robots' prominent features is their ability to learn from and quickly adapt to their foes' own martial arts moves and combat techniques in a matter of seconds, enabling them to quickly overwhelm an unsuspecting enemy. As a consequence, the best way to defeat them is to constantly be unpredictable and come up with new moves/techniques to surprise them with.

The Footbots also differentiate from their predecessors in the armament they wield and their ability to morph into a more formidable battle form. When first encountered, the bots look normal and are armed with normal ninja weaponry; e.g. katana, tantō, naginata, kama, shuriken, and kunai. However, if the opposition is observed to be stronger than normal, the bots can morph their arms into more formidable weapons, including large curved blades, drills, huge mace-heads, and buzzsaws. They can also rapidly extend another pair of arms which also can possess the same enhanced weaponry.