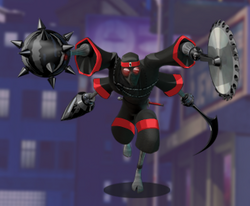 The Footbots appear much as they do in the 2012 animated series, eventually replacing (or in some cases, appearing alongside) the Foot Ninja. Like in the series, they often attack with four arms equipped with various weapons. 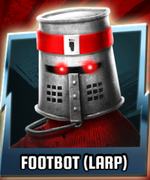 Teenage Mutant Ninja Turtles Legends has an enemy known as "Footbot LARP", which is wearing a knight's costume. It is a modified model of the regular Foot Ninja, and thus does not have multiple arms.

Retrieved from "https://turtlepedia.fandom.com/wiki/Footbot_(2012_video_games)?oldid=400487"
Community content is available under CC-BY-SA unless otherwise noted.