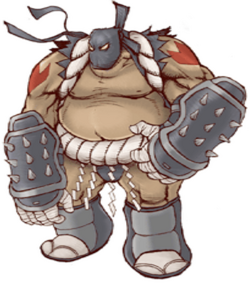 Foot Sumo Ninja (referred to as Mega Foot in the Prima Game Guide) appear exclusively in the video game, Teenage Mutant Ninja Turtles 2: Battle Nexus in the future nightmare world where the Turtles met Slashuur and they later appeared on Shredder's ocean liner. Foot Sumo Ninja are tall, obese warriors, but despite their size they can run quickly, and are tough to beat in battle due to their high amount of health. Foot Sumo Ninja don't usually attack unless they are bothered.

Retrieved from "https://turtlepedia.fandom.com/wiki/Foot_Sumo_Ninja?oldid=487897"
Community content is available under CC-BY-SA unless otherwise noted.