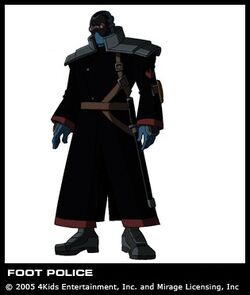 The Foot Police (also known as Foot Gestapo) were a type of soldier used by The Foot in an alternate future timeline where Donatello disappeared. The Foot Police have only appeared in the 2003 TV series episode Same As It Never Was.

These members of the Foot Clan served as security enforcers and patrolled the streets of a darker Human world controlled by the Shredder. They wore long trench coats with the symbol of the Foot present on their left shoulder which identified them as members of the police force. They typically carried machine guns but also had swords sheathed by their hips which they were capable of using for combat. Their faces possessed two red glowing eyes and were covered.

While numerous, they were only Human making it possible for a person to overpower them.

A group of Foot Police discovered Donatello who had been displaced by the Time Scepter leaving him in a darker future controlled by the Shredder. The patrol attempted to apprehend the turtle but were attacked by Michelangelo from that timeline who managed to defeat the patrol as well as destroy their vehicles.

It was noted that the Shredder in this timeline had thousands of Foot Police controlling the Earth.

Retrieved from "https://turtlepedia.fandom.com/wiki/Foot_Police?oldid=494575"
Community content is available under CC-BY-SA unless otherwise noted.