A Mystic initiate named Myzoko attacked Hamato Splinter in the astral plane and after a tough battle Splinter finally defeats him, explaining that his will is greater than the mystics, thus ensuring his victory. On the rooftop, the mystic’s body is curled up in a paralyzed fetal position. Three Foot Mystics (a woman, a warrior and an old man) approach Myzoko and declare that he has failed his final ordeal. They then kick him over the side of the roof where he falls to his death (even though he tried to beg them not to do this). Leaving, the female Mystic says that one day, they too must face the rat (a.k.a. Splinter) in combat.

One of the Mystics Mashima created the Shark Shredder. 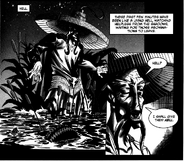