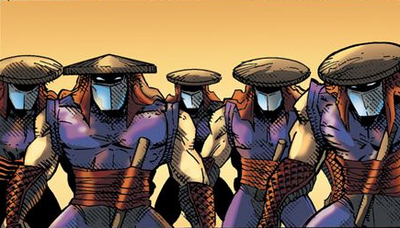 The Foot Elite Guard also known as the Shredder's Elite Guard or Elite Ninja (traditionally they once were known as the "Shredder Elite"). They are a group of the most accomplished ninjas in the Foot Clan who serve The Shredder as bodyguards and field leaders. The weapons they use are the Sai Prong, Kama, Sword, Battle Ready Axe, Bow and Arrow, Tantō, Swift Sinister Swords, Chaos Club, trident, tetsu-bishi, kusarigama, manriki-gusari, spear, ax, and twin bladed sword. They will stop at nothing to destroy their foes. As Master Splinter said in The Shredder Strikes Back, Part 2, they "are the deadliest of his warriors. Lethal assassins". This matches their menacing look and builds. They serve the Shredder with absolute loyalty.

Sometimes they are also leaders of small foot ninja teams in order to hunt down the turtles or other enemies.

The best of the best in the New York Foot Clan; warriors trained personally by Oroku Saki and who swear allegiance to no one but him. Leonardo encountered two Shredder Elite the winter he found himself faced by the resurrected Shredder and managed to slay one of them before falling into a trap (Leonardo special). Over a year later, when the Turtles invaded the Shredder’s Hudson Block headquarters, Leonardo slew four more before going on to defeat Oroku Saki for the second and final time. The four Elite had, however, nearly killed Raphael before Leonardo intervened (TMNT Vol. 1, #21). Following the death of Oroku Saki, the New York Foot Clan dispersed into warring factions. The Shredder Elite allied themselves with none of them, being honor bound to avenge their master and slay the Turtles. Soon the Shredder Elite joined the fighting, openly slaying Foot Soldiers.

When Karai, leader of the Japan Foot, came to New York to quell the troubles and reintegrate the Shredder Elite, they reacted with extreme prejudice, forcing her to call upon the assistance of the Foot Clan’s former enemies, the Turtles. The Elite then slew Karai’s daughter. Upon the promise of peace were they to help, the Turtles managed to take out the Elite with Karai’s help, though two committed seppuku. In the final battle against the last of the Shredder Elite, Karai disguised herself as Shredder to confuse them. Leonardo killed the last Elite, finally sealing the truce between the Foot Clan and his brothers (TMNT Vol. 1, #50 - 61). They also appear in Tales of the TMNT vol 2 #36 "To Serve and Protect" and Tales of the TMNT #69 "Dark Shadows" where they are killed by Shadow Jones. 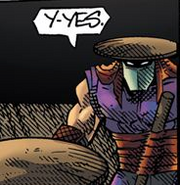 Add a photo to this gallery
Retrieved from "https://turtlepedia.fandom.com/wiki/Foot_Elite_(Mirage)?oldid=497681"
Community content is available under CC-BY-SA unless otherwise noted.