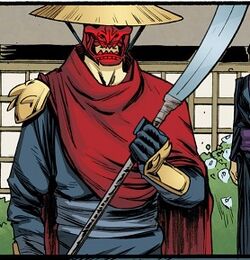 In the IDW continuity, the Foot Elite are the personal bodyguards of the Foot Clan leader. They accompanied Shredder when he was more unprotected and informal, such as when Donatello used the Metalhead robot to converse with him.

They also accompanied Shredder on his strike mission to Burnow Island, where one of their number was killed by a laser blast to the face. The fate of the others was left in doubt when the island was terraformed and the atmosphere made unbreathable for humans.

Upon Splinter's ascension to the leadership of the Foot, a squad of the Foot Elite protected him during an attack by Jennika and the Street Phantoms, but were defeated due to their inability to strike their enemies. Two were also left near Shredder's tomb to guard his body, but were brainwashed by Kitsune into turning against their master.

The Foot Elite also accompanied Splinter during various occasions and during the invasion of the Triceratons Splinter organized a team of Foot Elite and infiltrated the Triceraton command center in order to kill Commander Zom. The Elite easily dealt with the Triceratons but were unable to incapacitate the Turtles and instead were defeated by them.

Retrieved from "https://turtlepedia.fandom.com/wiki/Foot_Elite_(IDW)?oldid=450593"
Community content is available under CC-BY-SA unless otherwise noted.