TMNTPedia
Register
Don't have an account?
Sign In
Advertisement
in: Male characters, Humans, The Next Mutation characters,
and 5 more

Foot Clan (The Next Mutation)

In Ninja Turtles: The Next Mutation the Foot Clan is a street gang, similar to the Foot Clan in the first two movies. The Foot Clan is implied to have battled the Turtles constantly for many years, as the Turtles are now 18 years old. When Splinter falls ill, the full fury of the Foot Clan is unleashed upon the Turtles' lair, which has recently been discovered by them. The sheer numbers of the expanding Foot Clan easily overwhelm the Turtles in combat and Shredder then prepares to finish them off, vowing to destroy their leader as well. However, Venus de Milo uses her Shinobi magic, drives Shredder insane by calling the true Oroku Saki to the surface to take control, thereby destroying the Shredder, seemingly forever.

After Venus defeated the Shredder, Leonardo tells the kids that the Foot is a lie and their master is insane, and the clan was disbanded. 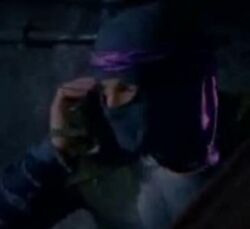