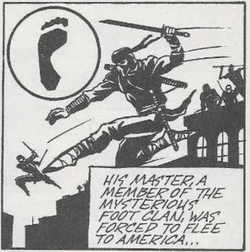 The Foot Clan is a group of ninja who has mastered various forms of martial arts and are recurring enemies of the TMNT. They are led by Shredder and later Karai.

In the universe Eastman and Laird's original comic books, the Foot Clan was started by two Japanese men named Sato and Oshi, ironically, by a mistake by the Ninja Turtles. In Volume 1 Issue 47, the Turtles and Timestress Renet traveled to a time prior to the Foot's creation in an attempt to stop their enemy Savanti Romero. There Raphael met two friendly Ronin, Sato and Oshi, and not realizing who they were, taught them Ninjutsu. After the Turtles returned to the present, Sato and Oshi decided to follow the ways of the ninja. The the two men founded the Ninja Clan under the philosophy that it would grow up from a small beginning, step by step to become a powerful force. Oshi declared: "We must never again mention the strange shelled creatures. In time, others will join us and we will become a force to be reckoned with. So just as every journey begins with a single step... we shall call ourselves The Foot."

The Foot Clan became the most widely feared clan of ninja warriors and assassins in Japan. Both Hamato Yoshi and Oroku Nagi were members, however a young woman Tang Shen divided them, until one day Nagi attacked Yoshi's love Tang Shen and Yoshi killed Nagi. Dishonored, Yoshi and Tang fled to New York City, while Nagi's younger brother Oroku Saki, was adopted by the clan and was trained to become a fierce ninja. When he was ready, Saki was sent to American to head the New York branch of the Foot Clan. Under his leadership, it took only a year for it to become a powerful and fearsome group.

Saki also sought vengeance for his brother and, using the persona of "The Shredder", he assassinated Yoshi and Shen. Over a decade later however, he had to deal with Yoshi's heirs, his former pet Splinter and the Turtles he trained, the Ninja Turtles challenged The Shredder to a rooftop duel to avenge Yoshi's and Shen's death. The Shredder sent his Foot Ninja to fight the Turtles, but they were no match for the Turtles and were eventually defeated. Shredder then fought the Turtles himself, and although he was a more skilled ninja than them, he was killed when he fell off a building carrying a grenade.

After the Shredder's death, the American Foot fell apart and a gang war developed in New York, which threatened the city, the Foot Soldiers began fighting Shredder's elite guard. Karai, a clan leader from Japan, came to New York to stop the clan war. She enlisted the Turtles' help in this, in exchange for promising that no Foot shall ever try to avenge the Shredder again. This peace treaty is still in effect in Volume 4 of the comic.

In Volume 4, the Foot were given a security contract with the Utroms for their base because the Utroms have a no weapons policy and the foot are skilled in hand-to-hand combat. At some point mysterious Aztec warriors started to attack the Foot all over the world. Karai informed Leonardo that the New York Branch of the Foot was all that was left.

The Foot Clan's logo is a drawing of a left foot. Issues 3 and 4 of the new Tales of the Teenage Mutant Ninja Turtles feature a Foot Mystic with magical abilities, including the power to resurrect the dead.

Retrieved from "https://turtlepedia.fandom.com/wiki/Foot_Clan_(Mirage)?oldid=498749"
Community content is available under CC-BY-SA unless otherwise noted.