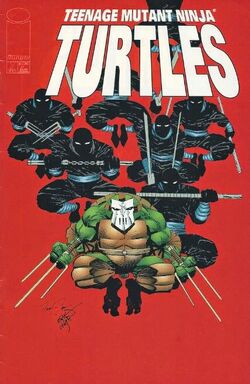 Currently, there is much conflict in both the Japan and New York Foot, and Karai is missing and feared dead (TMNT Vol. 3, #7). The entire ruling council of the NY Foot Clan was gunned down in their headquarters by a group of Antoine Puzorelli’s hitmen in retaliation for the loss of Puzorelli’s granddaughter, Shadow, whom Michaelangelo earlier rescued. In the midst of the massacre, Raphael assumed the mantle of the Shredder, donning the armor of Oroku Saki. He then swore to help rebuild the Foot. (TMNT Vol. 3, #12 - 14). When Raphael returned to his Foot Clan lair in an Oriental theater later, after being confronted by Japan Foot and another claimant to the mantle of the Shredder, Pimiko, accompanied by her father's Shredder Elite who swore allegiance to her now, was told by two nameless members of the Council of Five who quickly fought him into submission that Karai "no longer even sits on, much less leads, the Council of Five. She made a great mistake and lost much face." It is unknown what her true fate is, but at this point the leadership of the Council of Five, and subsequently leadership of the Japan Foot Clan, apparently rested solely within the Council of Five itself. It is not known why or when the Council of Eight was reduced to the Council of Five, but it was assumedly considered the Council of Six when Karai led the Japan Foot. Raphael quickly defeats Pimiko but refuses to kill her against the Council's wishes, instead cutting off her ponytail and proclaiming victory. Under the two present members of the Council of Five, the Foot turn against both Pimiko and Raphael, turning the two former enemies into friends as they took on not only the Foot and Elite Foot present and Cheng, but "Lady Shredder," a third mysterious claimant that appears to know the Turtles. When the Turtles render aid, the battle is won, though the two members of the Council of Five, Cheng, and Lady Shredder all escape (TMNT Vol. 3, #21 - 23).

Retrieved from "https://turtlepedia.fandom.com/wiki/Foot_Clan_(Image)?oldid=467664"
Community content is available under CC-BY-SA unless otherwise noted.