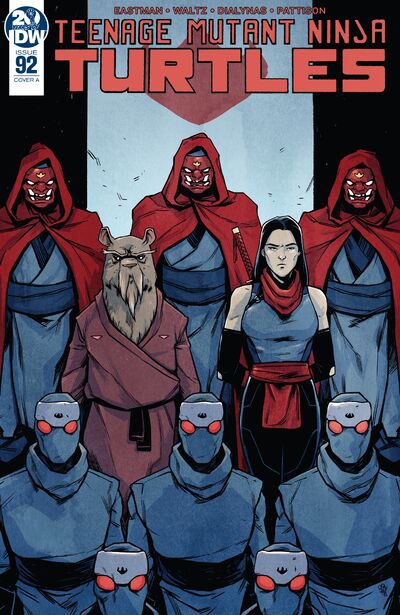 In the IDW Comics, the Foot Clan had existed since the time of feudal Japan, where it was founded by a ronin by the name of Takeshi Tatsuo, who had been betrayed by his master. The sorceress Kitsune helped Tatsuo to recover from the severe wounds he had suffered in the assassination attempt; the name of the clan was inspired by the bloody footprint of Tatsuo, whose lost leg was completely healed by Kitsune's ministrations.

Finally, Tatsuo was betrayed by his clan, when it became known that he made ​​a pact with a magician, but his soul was born again in the son of his murderer, Oroku Saki. The reawakening of his old memories caused him to become a bloodthirsty tyrant, but without his leadership for several centuries, the Foot became a tamer version of its former self. In the twenty-first century, Karai sought to return the clan to supremacy.

In more recent times, the clan was under the leadership of a now-immortal Saki—now known as the Shredder— andtried to expand its supremacy in New York City. Its ninja were therefore often sent to amass any scientific advances that could help the Foot, and also to find new test subjects for the mutagen; this led to the creation of the mutant Alopex.

In this endeavor, the Foot Clan also came into contact with the extradimensional warlord General Krang, who also wanted to create a mutant army to meet his objectives. An attack by the Foot in the laboratory of Krang's ally Baxter Stockman led by a combination of circumstances to the creation of the Turtles and their father Hamato Yoshi a.k.a. Splinter, who in a previous human life had himself belonged to the Foot Clan.

After the events of "Gauntlet", the Foot Clan is now under the leadership of Master Splinter, after he finally defeated the Shredder. After Saki's death, Karai gave Yoshi the rank of jōnin and control of the Foot Clan. After gaining control of the Foot Clan, Yoshi intended to reform the Foot Clan by bring them back the ways of shinobi by having them follow a more honorable path. His efforts at first were met resistance by one of the Foot Assassins, Jennika, who attempted to overthrow Hamato Yoshi with the help of the Street Phantoms. After overpowering her with the help of Leonardo and Alopex, Splinter was able to handle the coup, and Jennika pledged her allegiance to her new leader. Three of Splinter's sons—Leonardo, Raphael and Donatello—were appointed as joint chūnin (second-in-command) of the Foot Clan, while Michelangelo refused to have anything to do with the Foot. The Clan would later suffer the defection of Kitsune—who had always had her own agenda—and the loss of Alopex to Kitsune's mind control.

After the Foot Clan's defeat of Darius Dun, Splinter ordered the already-surrendered Dun be executed at Jennika's hand when Dun refused to submit all his assets to Foot control. This surprisingly cold act alienated Leonardo, Raphael and Donatello from Foot Clan life and they quit the clan. However, they parted ways with Splinter under relatively good terms, with Jennika becoming the new chūnin. Splinter would later acknowledge this as the founding of a new ninja clan—the Hamato Clan with Leonardo as leader—which would function separately and independently from the Foot Clan. Under Splinter's control, the Foot would continue to be his sons' allies, lending their resources as needed, such as the rescue of Alopex from Kitsune's control.