The Foot Clan was the oldest of all ninja clans in Japan. For the longest time, it was led and controlled by Oroku Saki, who was also known as The Shredder. However, after his crushing defeat at the hands of Hamato Yoshi, he and his forces fled their New York territory and the clan was taken over by Karai, who recruited new soldiers and her old friend Shinigami to help her scout out and destroy the Shredder.

The Foot Clan is an old ninja clan and longtime rivals of the Hamato Clan. It was founded by Koga Takuza who also crafted the Kuro Kabuto as the symbol of leadership. Eventually this helmet was lost.

Centuries later, the Hamato Clan invaded and sacked the Foot Clan's ancestral village and decimated the clan. But one of its members survived: a baby named Oroku Saki. Saki was adopted into the Hamato Clan by its leader Hamato Youta, who was Hamato Yoshi's father.

Decades later, Oroku Saki and Hamato Yoshi both fell in love with the same woman named Tang Shen. The rivalry that had long been a part of their friendship was severely strained by this development.

Oroku Saki discovered his heritage and that the responsible for his clan's extinction and the death of his biological father was Hamato Youta, the man he once called father and master. Then he attacked Hamato Yoshi's home with murderous intent. In the attack Tang Shen was killed and both men were badly injured with Yoshi trapped in the burning remains of his house. Saki, meanwhile, walked away with Yoshi's infant daughter Hamato Miwa, who he renamed Karai.

Shortly after this event, Saki re-discovered the Kuro Kabuto and began to habitually wear it to cover the burns on parts of his face which he sustained in the attack on Yoshi's home. Now calling himself the Shredder, he set out to rebuild the Foot Clan until it became a powerful criminal syndicate. This was done by recruiting its army of ninja through a chain of dojos across America owned its celebrity fighter Chris Bradford, and allying with many Chinese gangs through the Purple Dragons, many Brazilian gangs through its street contact Xever Montes, the Russian mob through its weapons dealer Ivan Steranko and the Italian mob through its drug dealer Don Vizioso and a deadly Asian mutant assassin, Tiger Claw.

Fifteen years later, Shredder learned that Hamato Yoshi had survived the fire and was living somewhere in New York City. Upon his arrival, he discovered that the "new ninja clan" he thought Hamato Yoshi was training were in fact four mutated turtles. For being important to Yoshi, and for consistently interfering in the Foot Clan's activities, they earned the utter hatred of the Foot Clan and Shredder. Their presence pushed the Foot Clan to form an alliance with The Kraang who provided them with advanced technology. The Kraang provided them with Footbots to strengthen the Foot Clan and even Chrome Dome.

In the aftermath of the Kraang's invasion that was ended by the turtles and the Mighty Mutanimals, the Foot Clan was revealed to have become the most powerful syndicate in New York with the mutations of Montes and Steranko cementing the allegiance of their respective groups and with the Purple Dragon's new leader Hun eagerly serving the Foot Clan. In his meeting with Vizioso, Shredder mentions how he controls the Russian mob through Rocksteady, the Purple Dragons and other Asian gangs through Hun, and the South American gangs through Fishface. After some "persuasion" from Shredder, Don Vizioso swears his group's allegiance to Shredder. The Foot Clan have begun gathering special chemicals to brew a mind-control serum that resulted in the creation of Brain Worms.

Ever since the Triceraton Invasion was thwarted and Shredder's defeat at the hands of Splinter, thanks to Leonardo’s warnings, Karai enlisted her old friend Shinigami to help her rebuild Foot Clan and kill Shredder. While the Karai-controlled Foot Clan utilized the Foot Ninjas, Shredder's forces utilized Elite Footbots. Later on, Shredder took a mutagen serum made by Stockman-Fly which turned him into the Super-Shredder. Super-Shredder eventually destroy Splinter yet again which causes an enraged April to push him off a building but he survived.

By "Owari," Leonardo was able to slay Super Shredder while the rest of his minions (sans Rahzar who got drowned by Leatherhead) got away thus avenging Splinter’s death.

In Scroll of the Demodragon, Tiger Claw swears vengeance against the turtles for Super Shredder’s demise and uses the Seal of the Ancients and the Scroll of the Demodragons to summon a demodragon named Kavaxas to resurrect him and Rahzar. But as it turns out, in End Times, Kavaxas was just using Shredder to destroy the seal to free himself and attempts to unleash the ghosts from the Netherworld to destroy earth. But thanks to Michelangelo, Kavaxas was forced to end his invasion and was sent back to the Netherworld along with Shredder and Rahzar. In the aftermath of the ghost invasion, Tiger Claw has made a truce to the turtles and their allies while the rest of Shredder’s forces left the Foot Clan thus bringing their ongoing war to an end. 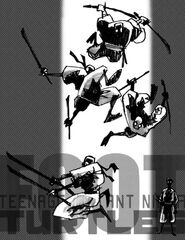