In the IDW continuity, the first lair is the New York City sewer location where Splinter, Leonardo, Michelangelo, and Donatello lived for the first sixteen months after their mutation. Raphael joined them after fifteen months, and it became his home for a brief time afterwards.

This first lair was—compared to the second—more of a typical sewer location, which Splinter and the Turtles had furnished with appliances and furniture. However, they were forced to evacuate this lair when it was invaded by M.O.U.S.E.R.S. controlled by Old Hob, which not only compromised the secret location of their home but also wrecked the structure and everything within it. The Turtles did not return to this lair, and instead took up temporary residence in Second Time Around building.

In Teenage Mutant Ninja Turtles: Turtles in Time issue 4, a future version of Donatello would eventually return to the ruins of the first lair to try to live out his life in hiding after General Krang and the Shredder had conquered and divided the world between them. Initially determined to no longer be involved with the struggles of the world, this future Donatello would have a change of heart and invite a future version of Woody Dirkins and his resistance fighters to take refuge in his lair. 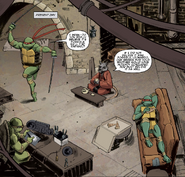 Add a photo to this gallery
Retrieved from "https://turtlepedia.fandom.com/wiki/First_lair_(IDW)?oldid=540581"
Community content is available under CC-BY-SA unless otherwise noted.