The farm is an important recurring location in the Teenage Mutant Ninja Turtles multiverse. In all incarnations in which it appears, it is owned either by the family of Casey Jones (as the Jones Farm) or by the family of April O'Neil (as the O'Neil Farm). In the various TMNT storylines, it functions as a second home in the rural countryside away from the urban jungles of New York City. The farm is often located near Northampton, Massachusetts, but sometimes it is located instead in rural New York state. The farm is always first visited by the turtles as a peaceful refuge after a plot-critical calamity forces them to flee the city. 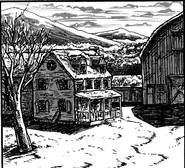