After witnessing the Kraang in action, Karai realizes the seriousness of the alien threat and approaches the Turtles to propose an alliance.

The episode begins with the Turtles watching over the TCRI building for some type of ship that is apparently about to come through the portal (according to Donnie's calculations and the data storage device). Out of nowhere, Karai shows up and starts to playfully fight with the Turtles. Once again, whilst she manages to gain the upper hand, she also tries to force information about all of The Kraang's newly-hatched, conniving schemes out of Leonardo, but Leo refuses to answer her, mostly due to her largely spiteful betrayal in "The Alien Agenda". However, Raphael accidentally reveals The Kraangs' plan to her, just before a gigantic Kraang Ship is released out of the TCRI building (coincidentally), immediately spots the five, and starts to shoot tons and tons of lasers at all of them. Karai manages to lose the ship by running into an alley way, but the Turtles greatly struggle to escape from the aliens...However, Leo is narrowly able to distract The Kraang in order for him and his brothers to escape down into the sewers. However, the ship then turns completely invisible and both the Turtles and Karai flee.

At the Foot Headquarters, Karai tells The Shredder about the serious, horrific threat that The Kraang might currently pose. Unfortunately, after one brief moment of hesitation, due to her father's largely unavailing vendetta against Splinter, he tells his adoptive daughter that they will proceed as already planned. He then tells her that, the following evening, The Foot Clan is going to be receiving quite a large shipment of varied weapons at the docks that could be used for this very task. Karai tries to reason with her father once again, but he then slams down his fist & remarks to her that she has said her piece and that it has definitely been noted, but that she will now willingly abide by his every command as well and his alone. She does comply, though rather begrudgingly.

Back in the lair, the Turtles discuss what method they should use to defeat The Kraang ship. Raph sarcastically suggests that they should randomly fly up into the air until they hit it, but Leo obviously dismisses this idea. However, Donnie does come up with what is an effectual idea for the most part - Installing radar beacons on top of some buildings throughout the city in order to possibly locate the invisible Kraang ship. They all quickly agree and then set out to the surface.

After securing his tracking beacon, Leo calls Donnie to let him know that he is all finished and on his way back to the lair. He continues dueling with Karai, who once again randomly shows up out of nowhere and smirks at him. After Leo complains that he is fed up with her consistently petty and pesky ambushes, which have become very pointless as of now, Karai smirks at Leo, stating that she is willing to help him fight the Kraang. After the duo sheathe their swords and talk matters, Leo immediately rejects this by listing three fast facts as to why he should keep his distance from her. In response to this, Karai states that if the Kraang invade Earth, then they wouldn't have much of a planet to live on (since the Kraang have even more malicious plots than the Shredder, which is to annihilate the human race, which Shredder doesn't seem to care about). Leo doubts that Shredder would agree, to which Karai agrees, ranting about how much he is 'stubborn and short-sighted' who annoys her, in addition to claiming that Shredder's vendetta against Splinter will get them all killed if they don't deal with these aliens first. Karai sees potential in teaming up with Leo (who has been fighting the Kraang for a while and also because Leo poses a measure of noble morality and honor like Karai does, as they both will make sure that no innocents will be directly harmed by their actions, even if it goes against what they originally planned) and offers a temporary alliance because The Shredder did not listen to her or reason whatsoever. Remembering how Karai treacherously backstabbed him by selfishly abandoning him to die at the mercy of a pyschotic mutant she heedlessly and intentionally created, Leo declines before slipping away as Karai looks on with a downcast expression. Back in the lair, Leo talks to his brothers, Splinter and April about whether to trust Karai or not. Splinter tells him to trust his own instincts, but not be so trusting of her. Donnie says that it would be nice to have a kunoichi on their side, but he then gets flustered when April becomes offended when he doesn't acknowledge her as being qualified as a kunoichi.

When the Turtles locate The Kraang scouting ship while they are in The Shellraiser that night, they ultimately get cornered in an alley way (much due to Mikey's incompetence in guiding Leo around) and their vehicle is attacked. However, Karai then rides up on a motorcycle and jumps right onto the top of the Kraang ship and starts slamming her katana on it, which barely does anything. The ship then leaves with her on it. Leo advises Donnie to turn around and pursue the strange craft, but he replies that the Shellraiser cannot take another onslaught in the condition that it currently is in. So, Leo decides to take the Stealth Bike, finds, and saves Karai at the last possible second (as she nearly ends up falling to her death). He then covers the top of the Stealth Cycle and successfully outruns and escapes the gargantuan, floating ship.

He then quickly takes her underground and brings her inside The Shellraiser, where they hear what she has to say. She offers them a missile launcher from The Shredder's weapon armory that he's going to be receiving soon, which they could indeed use on the ship (as the likeliness of successfully taking down a floating warship with compressed garbage is a zero). Raph immediately distrusts her, along with all of the other Turtles. She tells them that she, unlike The Shredder, is actually willing to potentially put her life on the line to stop The Kraang so that they may live to fight yet another day. So, they all agree on but a temporary truce and for Karai to get the missile launcher by herself. Because Leo saved her and gave her a chance to explain herself, in addition to Leo keeping his distance from Shredder, Karai develops some friendship for him.

At the lair, Mikey excitedly talks about what they could do with the rocket launcher after they shoot down The Kraang ship. However, Leo has some doubts that Karai will even agree and give them the launcher. Just then, Raph tells Leo that this could very well be the opportune time to take out The Shredder as well. At first, Leo immediately disapproves of the plan because he doesn't want to betray her trust, but he then reluctantly agrees after Raph tells him that this could be their one and only chance to take him by surprise. Raph is excited about this, and Leo seems to be as well, but he then turns away with a rather concerned expression on his face.

At the docks, The Shredder, Karai, and several Foot Soldiers meet with a man that has a distinctive Russian accent and a diamond eye (who is an old companion of the Shredder that brought the weapons to them by ship). The Foot then give the man his due payment, and Karai then goes off to inspect the merchandise. Meanwhile, just out of sight, on the top of a lone shipping container, the Turtles are preparing to take the fastidious approach of slingshotting an electro-grenade at the Shredder's armor (as it will use the metal as a conductor of heat to amplify the shockwave). When Karai makes her way to the armory to get the rocket launcher, she grasps it, but also happens to look up and notices that Mikey is just about to fire the grenade at The Shredder. Thus, she ends up shoving the latter directly out of the way, resulting in the two Foot Soldiers and the supplier being utterly electrocuted. She then switches her focus and fires the missile at the Turtles and they manage to jump clear, but then find themselves trapped with Shredder on one side and the newly-arrived Kraang ship on the other. The Turtles instantaneously start running between all of the shipping containers, while The Shredder is following in very close pursuit and he soon manages to corner them, demanding them to tell him where Splinter is, but in addition this time, he acquiesces on the fact that he will allow the Turtles to live just as long as they stay to watch their master perish. However, the villain then retreats and does a roll into one of the cargo boxes due to one of the ship's oncoming, perilous blasts. This allows Leo to lock him inside the box. Leo then begins to run off, and the other Turtles start to follow him, but Shredder manages to slice open the container's door with his gauntlet and then kicks it open, utterly blocking their path. Leo makes it to the box of missile launchers, but is confronted by a livid Karai. She tells him that she feels both awfully betrayed and dishonored and that he is just as absent-minded and obsessed as Shredder sometimes can be. She then reveals to Leonardo that the Shredder is none other than her father and, naturally, Leo is quite shocked. Karai then begins furiously attacking Leo and she tells him that the truce is now over, and, instead, they are now bitter, mortal enemies.

Meanwhile, Raph, Donnie, and Mikey face off with The Shredder, who narrowly evades a barrage of shurikens. Shredder is still quite a bit stronger than all of them combined, but after a number of weeks full of training and practice, they are able to put up a fairly good fight against him. After a short fight, the ship returns and Karai ducks for cover & hides from it. When she emerges, however, she finds that Leo has already taken a missile launcher and gone after the ship. Leo successfully shoots the ship down with the RPG and it quickly crashes into the water, unexpectedly taking The Shredder down with it. Thus, Karai sprints off the roof and dives into the ocean to save her father from drowning. The Turtles use this time to escape, and, on a rooftop in the city, they discuss how Karai is Shredder's daughter and how she was probably never gonna' be on their side in the first place. Mikey jokingly compares what Leo is going through to his own false belief that Leprechauns are indeed real.

At the docks, Karai has already rescued The Shredder, who quickly revives. He then reveals that he has just captured a Kraang, and states that Karai has always wanted a pet just when the Kraang alien utters quite a loud screech. 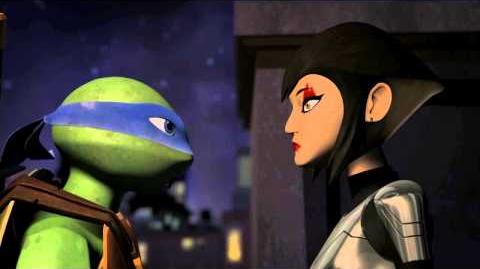