It’s nonstop excitement in this action packed issue of TMNT! Baxter Stockman’s latest inventions have found the Turtles lair in the sewers and it’s a scramble for survival… and not everyone will make it out safely! General Krang also provides the answers to some lingering mysteries! AND Casey Jones and April make an important connection?? This issue has it all!

In his penthouse suite, Baxter Stockman is explaining to General Krang that everything is under control; Splinter is about to be captured and the psychotropic compound will be retrieved. Krang asks why they couldn't just get a sample from Hob's blood, but Stockman explains that the compound within Hob's blood is too impure. The Turtles, too, would not be able to provide samples of the psychotropic for the same reason. Stockman tells Krang that there is one other specimen who seems to have had a controlled injection of the compound, the mutant ninja snow fox created by Krang's competitors. Krang tells Stockman three things he needs to know: one, that this "competitor" is merely a nuisance and will be dealt with when the time is right; two, the success of his mission is of utmost importance; and three, his mission calls for intelligent mutant super-soldiers, and if Stockman cannot provide them, he will be eliminated.

Down below, the Turtles continue fighting off the robots controlled by Hob. While they're busy fighting, Hob causes the robots to emit a smoke screen and departs with Splinter. In the process however, he drops the remote control for the M.O.U.S.E.R.s.

April and Casey are getting to know each other over coffee at a doughnut shop. Casey tells her that ever since his mom died, he and his dad haven't gotten along very well. April tells him about her dad's bad stroke and how she almost quit school to go home and help her mom take care of him. Casey asks her what caused her interest in self-defense, and April tells him about the break-in that occurred while she was working in the Stockgen laboratories and the ninja who tried to kill her. Casey asks how she got away and she tells him that the lab rat named Splinter pulled the fire alarm and scared them away.

In the sewers, the Turtles have realized that Master Splinter is missing and Hob is nowhere to be seen. Donatello tells his brothers the robots must be on autopilot now and comes up with a plan. He has the other Turtles line up behind him, tricking the robots into thinking there is only one target.

Casey has something important to show April. They drive to a mostly abandoned part of town and park her van. She asks him where they're going and he tells her: the sewers.

The robots approach Donatello and the Turtles leap out from behind him, destroying the remainder of the robots. Donatello finds the remote control Hob dropped. The Turtles know they have a better chance of finding Splinter if they act fast, so they decide to split up and being combing the area. In the midst of making their plans they hear voices approaching, and a moment later Casey arrives with April in tow. At the sight of four teenage mutant ninja turtles, April faints. Casey explains to the Turtles that April knew them before their mutation and escape from Stockgen. The Turtles leave to begin searching for Splinter, and Casey laments that he he shouldn't have taught April how to punch, as she'll likely punch him for surprising her when she wakes up.

Regular Cover A by Dan Duncan.

Retailer Incentive Cover by Simon Gane.
Add a photo to this gallery 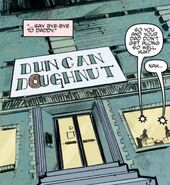 Duncan Doughnut.
Add a photo to this gallery

Retrieved from "https://turtlepedia.fandom.com/wiki/Enemies_Old,_Enemies_New,_part_3?oldid=432481"
Community content is available under CC-BY-SA unless otherwise noted.