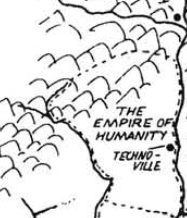 The Empire of Humanity is a nation in the After the Bomb timeline by Palladium Books. It was founded and is ruled by Daniel Christian, a renegade former military leader who found a fission reactor and violently overthrew the peaceful scientific community where it was located. The fission reactor became a power plant, and its immediate vicinity became the empire's capitol, Technoville.

Christian runs his nation as a brutal dictatorship, with human superiority as his major agenda. He and those of like minds are determined to either eradicate or enslave all of the world's mutant animal population. In a dramatic twist, although not an anthropomorphic animal, Emperor Christian is himself a mutant.

The empire's human population is actually massively dwarfed by their mutant animal population (28,500 humans to about 200,000 mutants), but the mutants are all slaves.

Retrieved from "https://turtlepedia.fandom.com/wiki/Empire_of_Humanity?oldid=515622"
Community content is available under CC-BY-SA unless otherwise noted.