Elizabeth "Beth" O'Neil is the mother of April and wife of John in the IDW comic series.

Elizabeth's husband John experienced a stroke during their daughter April's stint in college, which left him wheelchair-bound and reliant on Beth's care. They moved from Albany to Northampton in order to allow him more fresh air. When April and her boyfriend Casey Jones came to visit, Beth was initially unaware that April was also bringing the Turtles and Splinter with her, as they had all been forced to flee from New York City.

April soon discovered that her mother has some knowledge of the ooze from her old days as a journalist. When the Foot attacked the nearby barn, Mrs. O'Neil discovered the existence of the Turtles as they fought off Koya and a large number of assassins, before fleeing from the area with April.

Before she and her husband left the farm as well, Beth gave John a small amount of the ooze that April had given her. She was overjoyed when the effects of her husband's stroke were almost immediately healed.

Later, the O'Neils moved to New York once again, where they took up residence at the Second Time Around store. They also invited Casey to live with and work for them there, which attracted the ire of Hun. Fortunately, their neighbors on the same street came out to assist the O'Neils.

During the Triceraton invasion, Beth returned to her investigative journalism roots by recording a fight between Triceratons and the Purple Dragons, and distributing the footage online. She and her husband were later brought to the building where their daughter had been staying, and used her old journalistic contacts to falsely give Baxter Stockman the credit for ending the invasion. 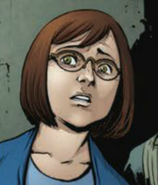