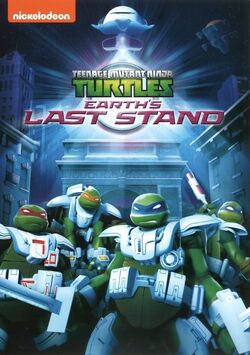 Earth's Last Stand is a home video release of the 2012 TV series. It was released in region 1 on December 13, 2016, and consists of seven episodes from season 4.

With the last fragment of the Black Hole Generator in their possession, the Turtles race back to New York City to stop the Triceratons before they destroy their home. But even if they save Earth from total annihilation, will their city ever be the same?

Retrieved from "https://turtlepedia.fandom.com/wiki/Earth%27s_Last_Stand_(home_media_release)?oldid=506208"
Community content is available under CC-BY-SA unless otherwise noted.