E'ro'chk (first introduced as Soowiiksa) is a warrior character appearing in Mirage Volume 4. Leonardo meets and befriends her in the Battle Nexus, along with Jorut and Oroku Yoshi. E'ro'chk ambushes Leo, but soon proves to be a friendly warrior who seeks competition.

In Volume 4 Issue 32, E'ro'chk parts ways with Leo and friends, explaining that she must get home to her wives. This makes E'ro'chk one of the first confirmed LGBT characters in official TMNT works. 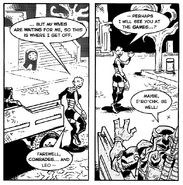 Add a photo to this gallery
Retrieved from "https://turtlepedia.fandom.com/wiki/E%27ro%27chk?oldid=455161"
Community content is available under CC-BY-SA unless otherwise noted.