Dumbo was a member of the Punk Gang in the 1987 TV Series.

He remained unnamed in all few of his appearances, and also never spoke. He appeared in Turtle Tracks, under the orders of the Shredder and the leadership of Rocksteady, tried to kill April O'Neil. Eventually, the Turtles showed up and he was thrown to a wall, along with Bebop and defeated. He later reappeared in Hot Rodding Teenagers from Dimension X as an mutant dog, and made one final appearance in Shredder and Splintered, placed behind bars with Scrag, Grunt and Dopey. All four were inside the Technodrome when it was sucked into Dimension X. 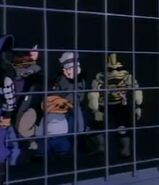 Add a photo to this gallery
Retrieved from "https://turtlepedia.fandom.com/wiki/Dumbo_(1987_TV_series)?oldid=517055"
Community content is available under CC-BY-SA unless otherwise noted.