The Roomy Reptile with a Cool Cache!

Capacity: Fourteen Turtle Tons
Favorite Saying: "Stick it in my back!"

Because Don's only got two hands, this roomy reptile relies on his storage shell to tote the tools of his trade. This storage shell superhero may not have anything up his sleeve, but check out his back! Don's got his bō snapped to his back for easy retrieval. And when the going gets Turtle tough, Don just opens his back and selects a weapon from his awesome arsenal: a sewer slingshot for the fast movin' Foot; a fish knife to scale the Foot down to size; a shark fin hatchet for hacking hoodlums; two ninja stars - one for each hand; and a killer pizza - the pizza that slices back!

Don's the first Turtle to perfect his storage shell. Not only can he hide his weapon arsenal in his back, but he can also sneak secret sewer stuff past the Foot Clan. Go ahead, try him out - but don't be surprised by his tricky Turtle insides! 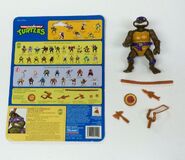