Although it is a common mistake in some past medias, the pterosaurs, mosasaurs, ichthyosaurs and plesiosaurs are "not" part of the clade Dinosauria.

The fossil record indicates that birds evolved from theropod dinosaurs during the Jurassic period and, consequently, they are considered a subgroup of dinosaurs. Some birds survived the extinction event that occurred 65 million years ago, and their descendants continue the dinosaur lineage to the present day.

The appearance of Dinosaurs in the various TMNT universes have been a common occurrence over the years. In addition to the anthropomorphic dinosaur samurai Chote, and dinosaur-like aliens of Triceratons and Styracodons, the Ninja Turtles have run into actual dinosaurs many times. 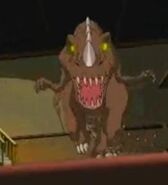 Half-Shell Heroes: Blast to the Past

Teenage Mutant Ninja Turtles: Turtles in Time issue 1 - The Ninja Turtles are sent back in time to the dinosaur era and there they meet a young Protoceratops they named Pepperoni. Other dinosaurs that appear are Therizinosaurus, Tyrannosaurus rex, Triceratops, Gallimimus, Saichania, Shantungosaurus, Velociraptors, and Saurolophus, along other prehistoric animals like the Quetzalcoatlus.

"I would have liked to have drawn some swimming dinosaurs, and it would have been fun to draw the Turtles dealing with something really big, like a Mamenchisaurus. It would be fun to draw something at that scale.", said artist Sophie Campbell when asked if there was any kind of dinosaur that she wanted to add but couldn't. She also stated her favorite pre-historic animals are the Glyptodon and Deinonychus.

Pepperoni along with various other dinosaurs appear in the mini-series TMNT: Bebop & Rocksteady Destroy Everything!

The Tubular Pterodactyl (came with Cave Turtle Raph) and Pterano Don are excluded since although the Pteranodon and Pterodactyl are prehistoric reptiles they are not dinosaurs.

The following figures are excluded since although those are based in prehistoric creatures those are not dinosaurs.

This is a list of dinosaurs that somehow appeared within the franchise.

The Anhanguera, Pteranodon, Pterodactyl and Quetzalcoatlus seen in some TMNT media are excluded since although those are prehistoric reptiles they are not dinosaurs.