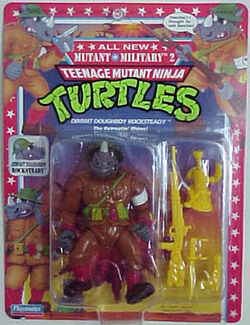 Shredder wants you! In fact, he’ll take anybody, just as long as they are smarter than Dimwit Doguhboy Rocksteady. This floundering flat-foot stumbles and bumbles into battle, which actually makes him more of a threat to the Turtle Teens. The Green Guys never know what stupid move Doughboy Rock will make. And to top things off, the trenches will never be safe, cuz this rhino reject’s got weapons only an idiot would carry: like the back-breakin’ bayonet – it’s so sharp it hurts! And if any trench-tuggin’ Turtle pokes his head above ground, Doughboy dunderhead loves to charge into the thick of things with his rabid rapidfire rifle. “Duh, look out, I’m comin’ through,” is his favorite battle cry.

Garbage Can Mortar Shooter
Add a photo to this gallery
Retrieved from "https://turtlepedia.fandom.com/wiki/Dimwit_Doughboy_Rocksteady_(1992_action_figure)?oldid=441800"
Community content is available under CC-BY-SA unless otherwise noted.