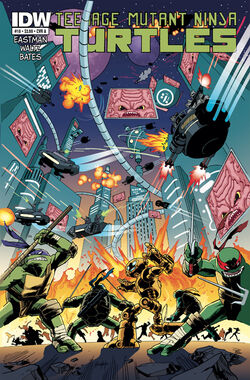 Dimension X is a warzone controlled by the evil Krang where Utroms, Triceratons and Neutrinos fight for their planets.

In the IDW comics, the name Dimension X is known for the first time in connection with Krang's ancestry as an Utrom. There is a major time difference between it and the earthly dimension, in which the time on Earth passes much faster than in Dimension X.

The following worlds have become known in this continuity:

Retrieved from "https://turtlepedia.fandom.com/wiki/Dimension_X_(IDW)?oldid=495455"
Community content is available under CC-BY-SA unless otherwise noted.