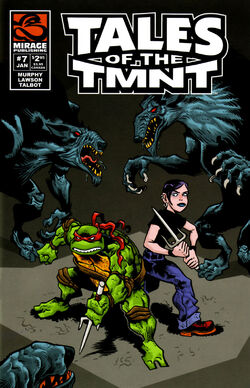 Darkness Weaves is issue #7 of volume 2 of Tales of the TMNT, published on January 2005 by Mirage Studios.

It takes place shortly before the start of volume 4, and explains how Shadow Jones came to live with Splinter at the Jones Farm in Northampton, Massachusetts. The events of this story are followed by the miniseries Raphael: Bad Moon Rising.

Shadow Jones watches a music video by her idol Lilith.

Shadow notices the time and shuts off the video. It is almost midnight, and she is in a bedroom in the sewer lair of her turtle uncles and her grandfather Splinter. Shadow makes sure Splinter is sleeping (not noticing he's not actually asleep) and sneaks past her Uncle Donatello's workroom and into the open sewer tunnel.

But Shadow is not out in the clear—she is startled to find her Uncle Raphael standing there, waiting for her. Raph correctly guesses that Shadow is off to see her friend Sloane, and reminds his niece that Sloane is wild, undisciplined and troublesome. Shadow points out that the same can be said of Raph himself, but Raph's point is that he knows all about these things. Shadow mockingly asks "Raphaella" if he has also been a 13-year-old girl, and continues walking past. Raph demands to know where Shadow is going, and she replies that she's going to a music concert called the Lilith Fair. The only "Lilith Fair" Raph has ever heard of was one organized by Sarah McLachlan which toured New York City the previous summer—Raph doesn't buy this explanation, and demands Shadow return to the lair. Shadow indignantly obeys.

That night, Raph mulls over visiting Shadow's room to bury the hatchet. When he finally does, he discovers only pillows underneath the lumps of Shadow's blanket and shouts a loud profanity—she has snuck out again. Splinter comes out of his room to ask what the noise is about. Raph gripes about how difficult it is to deal with children. Splinter is already well aware.

Shadow meets up with Sloane at a street corner, half an hour late. Shadow explains that one of her uncles kept her from leaving, so she had to sneak out. Meanwhile, Raph has wasted no time tracking Shadow and Sloane to their destination.

Shadow and Sloane enter an industrial building packed with hundreds of other girls who have come to watch Lilith, who begins singing on stage.

Raph is listening from the rafters, not caring at all for Lilith's music, but amazed by how entranced all the girls are. Lilith takes out two knives and continues singing on stage.

The audience watches as Lilith cuts her own wrist, and fills a goblet with her own blood. Shadow is shocked, but Sloane is unsurprised, having known in advance from Lilith's published liner notes that this was going to happen.

Lilith starts passing the goblet around to the audience, and one by one, girls take sips of her blood.

The scene unfolding below Raph is beginning to creep him out. But that's quickly the least of his worries as the roof above the rafters opens as an automatic skylight, forcing Raph to find a new hiding place. But the bright moonlight proves to provide little in the way of shade.

drinks from the goblet of blood and passes it to Shadow, but Shadow hesitates, staring at the goblet in her own hands as other girls tell her to hurry up. Raph fails to find shade, and accidentally knocks down a pebble, making his presence known to a security guard below. By now, Lilith is still singing, but her appearance has transformed into that of a wolf. Sloane has also transformed, but Shadow has not noticed any of this as she continues staring at the goblet.

Shadow finally decides to drink, but is quickly stopped by Raph who leaps down from the rafters, shouting.

Shadow notices she is surrounded by werewolves. Her ninja training kicks in, and she quickly splashes one of the werewolves in the face with the goblet's blood, having not drunk any of it herself. Raph declares that the "groupies" have become "loup-garoupies" as he enters the fray and begins stabbing transformed werewolves. This creates enough of a diversion for the girls who didn't drink blood to escape the concert grounds. Shadow asks for Raph's help, as she is currently defenseless and still surrounded by werewolves. The werewolf Lilith, no longer singing, attacks Raphael as he makes his way to Shadow, slashing him in the shell with her claws but failing to stop him. Raph hands one of his sais to Shadow. Shadow quickly says, "but." Raph responds, "Exactly. Watch my butt." The two ninja stand back to back facing the werewolves that surround them. Lilith commands her werewolves to kill the turtle, but not harm the girl with him. Shadow apologizes to Raph, who reminds her that the fight still isn't over. Raph tells Shadow to watch his back as he moves to attack more werewolves, but this quickly leaves Shadow vulnerable as she dodges werewolf attacks.

Raph kicks a werewolf who bumps into Shadow, who is knocked forward, her sai impaling a werewolf in front of her. This stabbed werewolf shouts out, and Shadow immediately recognizes it as the voice of her friend Sloane, and watches helplessly as Sloane transforms back into a naked human and dies in front of her. Lilith accuses Shadow of killing one of her werewolf sisters, and the werewolves all howl in reaction. Lilith demands that both the turtle and girl now be killed.

The fight is interrupted by the arrival of three other turtles—Shadow's other uncles Leonardo, Donatello and Michelangelo. Raph quickly grabs Shadow by the arm and guides her to his brothers. Shadow is still worried about Sloane as the turtles make a compass formation around Shadow to protect her. Leo is angry at Raph for not informing them about his outing. Shadow notices Lilith picking up Sloane's body, and Raph does not hesitate to throw several shuriken into Lilith's back, but this only diverts her attention. Lilith speaks, referring to both Shadow and Sloane by name as she vows vengeance against Shadow for disrupting her ceremony and for killing Sloane.

The police arrive with guns and flashlights, commanding everyone to freeze. With this, the turtles and werewolves swiftly flee the premises, and soon the police find only an empty building with fresh blood on the floor and the corpses of several huge "dogs." They had come to investigate a noise complaint about loud music, but arrive to what looks like what's left of an illegal dog fight.

Shadow arrives home safely, but Casey and April end their vacation early and hurry home. The family knows Shadow is no longer safe in the city, and within only hours they have packed up her belongings and spirited out of the city, not even allowed to say goodbye to anyone.

Casey drops off Shadow at the Jones Farm. She is accompanied by Splinter, and the two of them will live together on the farm for the foreseeable future. Shadow is initially resentful of this arrangement, and struggles to adapt to the far less vibrant life of rural Massachusetts, and feels dread during every full moon. But after a year she relaxes, and comes to accept her new life, and has even stopped dressing goth. Her life has changed greatly, but she has never forgotten Sloane or Lilith, and still thinks about Lilith's promise of revenge.

Retrieved from "https://turtlepedia.fandom.com/wiki/Darkness_Weaves?oldid=509761"
Community content is available under CC-BY-SA unless otherwise noted.