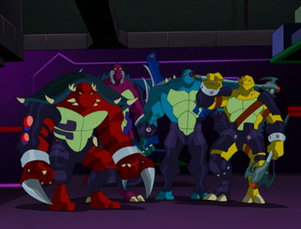 The Dark Turtles are somewhat-clones (due to barely resembling turtles themselves and being more of a Kanabo) of the Ninja Turtles created by Sh'Okanabo, but are under control of Darius Dun. They were created specifically for the Fast Forward animated series.

The Dark Turtles were made by the alien conqueror Sh'Okanabo from the genetic material of the Turtles stolen after they had thwarted his plans too often. After he made ​​a pact with Darius Dun, he asked him if the mutant clones were available. To protect himself from these wild and twisted versions of his declared archenemies, Dun implanted the Dark Turtles with a post-hypnotic suggestion that made ​​it impossible for them to attack him.

The Dark Turtles proved to be superior their 'originals' in power and toughness, but still did not win because of their general lack of intelligence and skill in battle, so they always been cheated on in every encounter with the Turtles. The ultimate fate of the Dark Turtles (and Dun) after the return of the Turtles to their true time is never revealed due to the second season of Fast Forward being canceled.

The Fall of Darius Dun

After the Turtles began interfering with Darius Dun’s weapons dealing organization, he managed to trap them in a fight with the Dark Turtles. However, the Dark Turtles were defeated one by one, leaving Dark Leo the only one left to fight the Turtles. They managed to take him out as well using a forklift, forcing the Dark Turtles to flee. They found Darius unconscious and escaped with him so he wouldn’t be captured by the authorities.

DNA is Thicker than Water

The Dark Turtles were in their lair fighting over a chicken leg Dark Mike had stashed, when Darius came in to reprimand them for being defeated by the Turtles. Dark Raph tried to attack Darius, but he couldn’t due to a hypnotic suggestion Darius put in them. He told the Dark Turtles to destroy the Turtles or else and Dark Leo came up with a plan, saying “if you couldn’t beat them, join them.” The Dark Turtles headed to Cody's penthouse in the Terrorpin and attacked, but as the fight went on, Dark Don trained his sights on Cody. He fired a laser beam at the boy, but Dark Leo leapt into the way of it, taking the beam to protect Cody. The other Dark Turtles fled in the Terrorpin, leaving Dark Leo behind and since he saved Cody, the Turtles took Dark Leo in to heal him, though Raphael believed it was all a trick. They kept him in the medical bay, containing him with a force field, but when Cody asked Dark Leo why he saved him, the Dark Turtle replied that it “didn’t feel right”. This prompted Cody to propose to the turtles that they might be able to help Dark Leo change his ways. As time went by, they seemed to be succeeding and to see how much he’d healed, Donatello used a device to test Dark Leo’s strength. He found the Dark Turtle still wasn’t at full strength, but Raphael started to taunt Dark Leo, trying to prove he was just playing possum. He broke the machine in anger, almost making part of it fall on Raph, but Dark Leo saved him. The Dark Turtle snarled at Raph that he thought he’d figured him out, but he knew nothing about him. Later, Leonardo went to visit Dark Leo and told him the story of the frog and the scorpion. A scorpion wanted to cross a river and asked a frog to take him across, but the frog asked how he knew the scorpion wouldn’t sting him. The scorpion swore he wouldn’t and the frog agreed, but as he took the scorpion across, he was stung by the insect. As they sank, the frog asked the scorpion why he did that since he’d doomed them both and the scorpion replied that it was his nature. After finishing the story, Leo gave Dark Leo a bonsai tree and a choice when he was healed, leave with the peacekeepers or stay with the Turtles. As he left the medical bay, Leo dropped the device controlling the force field holding Dark Leo. He used it to get out and contacted the other Dark Turtles, telling them to attack that night. However as Dark Leo went to deactivate the penthouse’s security, he found he had trouble bringing himself to do it. Leo confronted him, telling the Dark Turtle he could still go back to the medical bay and do the right thing. But Dark Leo snarled that he was a scorpion and deactivated the security, letting the other Dark Turtles enter. However they found Cody, Splinter, and the other Turtles waiting for them and started to lose, while Dark Leo fought Leo, who told him it didn’t have to be this way. Eventually, Dark Leo told the other Dark Turtles that their plan was a bust and they retreated. Upon arriving back at their lair, Darius scolded the Dark Turtles for losing, before throwing them a steak and saying he hoped they choked on it. However as opposed to his previous behavior, Dark Leo tore the steak in four pieces and shared it with the other Dark Turtles. Dark Mike remarked he never did this before and Dark Leo said it was called sharing and they should try it since they could be surprised what happens, indicating he did learn something, even more so when he revealed he kept the bonsai Leo gave him.

Essentially, the Dark Turtles are twisted clones of the Turtles. Because of their use as mere fighting machines (and probably also because of Sh'Okanabo's own, rather twisted aesthetics) they are far less intelligent than their originals and are prone to wildness and impulsive, aimless approach. However, they have advantages over their originals, their much improved strength and resilience make them from a pure physical standpoint dangerous opponents.

Retrieved from "https://turtlepedia.fandom.com/wiki/Dark_Turtles_(2003_TV_series)?oldid=518868"
Community content is available under CC-BY-SA unless otherwise noted.