Dark Leonardo acts like his original as the leader of the Dark Turtles - at least in the field. In everyday situations, however, he has far less control over his brethren, and often struggles with them for the little food which Darius Dun leaves for them. However, like Leonardo, he has a profound sense of honor that begins to unfold slowly over the course of the series.

Dark Leonardo is also the editorial name which refers to Leonardo when he was brainwashed into joining the Foot Clan in IDW continuity. 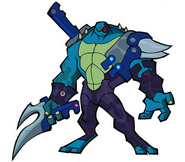