Daagon Captain is a captain of Daagon Forces. He and his forces guarding the Cosmic Ocean of Varuna. And when someone is coming to Varuna, he and his forces attack against them, which do not allies of Utroms. But if Varuna coming is a seal of Utrom, then they are not attacked. 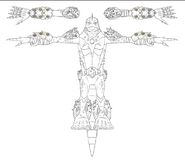 Add a photo to this gallery
Retrieved from "https://turtlepedia.fandom.com/wiki/Daagon_Captain?oldid=474280"
Community content is available under CC-BY-SA unless otherwise noted.