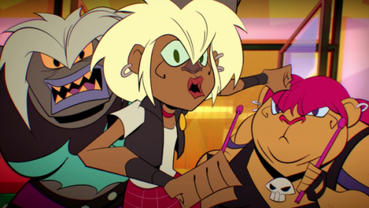 DIGG is an all-female mutant band that made their debut in the Rise of the Teenage Mutant Ninja Turtles episode "Pizza Pit."

They were an all-female band transformed into mutants by Oozesquitoes. Desiring greater stardom, the band began destroying strategic supports under the Turtles' (coincidentally) favorite pizza establishments, intending to sink a stadium into the ground so they could play to a captive audience. They succeeded in destroying three of the four supports, but were finally caught by the Turtles before they could finish their plan. They then began playing their music at the grand opening of the four pizza places, now combined into one restaurant.

Retrieved from "https://turtlepedia.fandom.com/wiki/DIGG?oldid=519162"
Community content is available under CC-BY-SA unless otherwise noted.