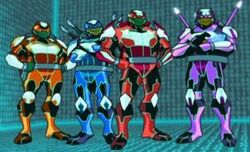 In TMNT: Back to the Sewer, Cybernaut was the term utilized for visitors to cyberspace. The Ninja Turtles and April entered cyberspace as Cybernauts, clad in special armor to benefit the setting.

The Turtles became Cybernauts to rescue the pieces of data of Splinter, which had been broken up and spread across the internet by Cyber Shredder. The Turtles also battled Cyber Shredder on this plane.

Cybernauts are capable of feats in cyberspace that they would never be able to in the "real" world, due to the environment being made entirely of data, including materializing objects by mere thought.

Retrieved from "https://turtlepedia.fandom.com/wiki/Cybernaut?oldid=477483"
Community content is available under CC-BY-SA unless otherwise noted.