Cowabunga is a catchphrase first used by the Ninja Turtles in the 1987-1996 animated TV series. While used by all four turtles, its generally associated with Michelangelo. As one of the more recognizable aspects of TMNT lore, it continues to be referenced in various other incarnations. The phrase is also spoken in the 2003 TV series, 2012 TV series and Rise of the Teenage Mutant Ninja Turtles. It is pronounced /ˌkaʊ.əˈbʌŋ.ɡə/ (KOW-ə-BUNG-gə).

Coming Out of Their Shells

The Coming Out of Their Shells tour includes a song called "Cowabunga", which is performed by Michelangelo.

The phrase "Cowabunga" was actually not originative from TMNT to begin with. It actually came from the British ventriloquist show in the 1950s, Howdy Doody, by the character Chief Thunderthud. Writer Eddie Kean wanted to think of a word that's the opposite of the friendly "Cowagoopa" (which was "hello", instead of the usual "How"). So, Eddie Kean came up with "Cowabunga", showing a sign that the character, Chief Thunderthud, would get frustrated.

Eventually, after the Howdy Doody show was off the air, the word got stuck into people's minds, over the years it has become a kind of triumph for surfers, eventually getting into different media like the Ninja Turtles; and since Michelangelo is known for "pop culture references", it doesn't hurt that Cowabunga, would be used. David Wise himself stated that it occurred to him to make Michelangelo exclaim "Cowabunga!" while surfing improvisedly over an object during the very first episode, just because he vaguely recalled a similar scene that Charles M. Schulz had already done during the 1960s within a sequence in Peanuts, where Snoopy surfed and shouted that word,[2][3] and that it was Fred Wolf's suggestion to use it regularly in the cartoon series as a catchphrase.[2]

This phrase enjoys some successor, mostly as a spoof of clichés. 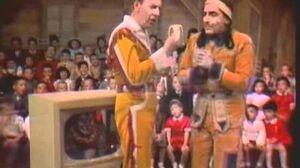 ORIGINS OF COWABUNGA 1960
Add a photo to this gallery

Retrieved from "https://turtlepedia.fandom.com/wiki/Cowabunga_(catchphrase)?oldid=519149"
Community content is available under CC-BY-SA unless otherwise noted.