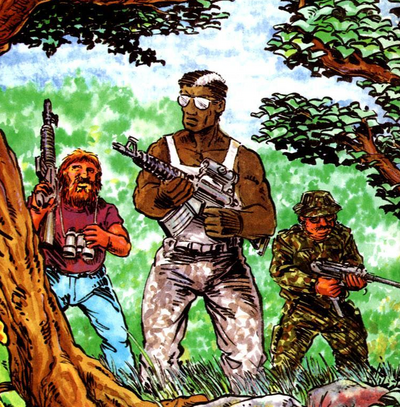 The Committee to Rebuild American Patriotism ("C.R.A.P.") was a small group of anti-Soviet "survivalists" (in actuality, terrorists), who appeared in Eastman and Laird's Teenage Mutant Ninja Turtles volume 1, issue #12, Survivalists.

The Committee was led by Skonk. They had kidnapped a University of Massachusetts physics student, Michael Murphy, and forced him to build an atom bomb for them. C.R.A.P. planned to set this bomb off at a military installation as a false flag operation, hoping that the Soviets would be blamed, thus causing the Cold War to degenerate into World War III.

Five weeks after his capture, Michael escaped and ran into the Ninja Turtles, Splinter, Casey, and April having a picnic in the forest. As Michael was explaining who he was and what was going on, Skonk shot him with a scope-mounted assault rifle. Despite the shot being a through-and-through, Michael was not yet dead. April and Casey moved to take him to the hospital, while Splinter and the Turtles hung back to provide cover.

Despite their guns (and Pewk's nunchaku), the terrorists were easily outmatched by the ninja. However, Skonk managed to blind Splinter with a handful of grass and retreated to the bunker where the bomb was held, hoping to take his assailants with him in a last stand. Fortunately, Donatello had already gotten to the bomb before him, and removed the plutonium core, making Skonk the only casualty.

By the time the Turtles made their way back through the forest, the remaining members of C.R.A.P. had fled.

Retrieved from "https://turtlepedia.fandom.com/wiki/Committee_to_Rebuild_American_Patriotism?oldid=498751"
Community content is available under CC-BY-SA unless otherwise noted.