TMNTPedia
Register
Don't have an account?
Sign In
Advertisement
in: Tours, Musicals, Coming Out of Their Shells

Coming Out of Their Shells 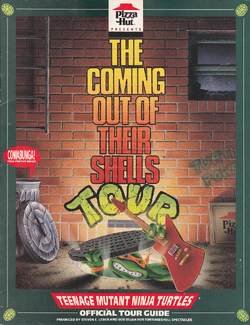 Coming Out Of Their Shells was a studio album, and subsequent live musical tour that occurred in 1990. The tour was endorsed and sponsored by Pizza Hut. The very first showing of the tour was broadcast live on Pay-Per-View. A VHS recording of the broadcast was made released, as well as a "Making Of" direct to home video. The tour is generally lambasted for its terrible costumes and wafer-thin plot. The band featured Donatello on keys, Leonardo on bass guitar, Michelangelo on guitar/lead vocals & Raphael on drums/percussion/tenor saxophone/vocals. Guest vocalists include Master Splinter, April O'Neil, and The Shredder.

A spin-off from this concert lead to a smaller concert set called "Gettin' Down in Your Town".

The Ninja Turtles have decided to travel around the world to meet their fans face to face. Singing songs they wrote such as "Coming Out of Our Shells", "Pizza Power", "Skipping Stones", "Walk Straight", and "Tubin'". Though while the Turtles are enjoying their time singing and dancing for the fans, Shredder decides to make an attempt to stop the Turtles from making people happy. Shredder, with the help of Baxter Stockman comes forth with his De-Harmonic Convergence Converter. Using this device they will steal all the music in the world; it also weakens the Turtles if they stand in front of it. Once Shredder arrives on stage with the De-Harmonic Controller the Turtles have to retreat and come up with a plan to save the day.

The album was recorded in a studio with the singers listed as "Vocal Coaching" their various characters on the album. It was released on MCA Records on cassette tape in 1990, during that year it went "Triple Platinum", {3 million albums sold}. [1] The songs were credited as being written by: "Michaelangelo, Raphael, Bob Bejan, and Godfrey Nelson, with the exception of 'Count On Us', which was written by the above and Keith Forsey."

The tracklist of the studio album is as follows:

A single was released, its extremely hard to find however. Some dine-in Pizza Huts that have jukeboxes had the single to promote the soundtrack and tour.

Tracks Not Included on Album

Also used in the tour but not included on the soundtrack

Tracks Not Included On VHS

These tracks appear on the album but not on the VHS, but later added to the "Getting Down in Your Town" concerts.

According to the scroll at the end of the Pay-per-view, the band played at these locations on the following dates:

Some of the names of the areas may be different as the last show was over 30 years ago.

The band had made special appearances on:

[NOTE: The following exchange only appeared on the Live Pay-Per-View broadcast. It was edited out of the VHS release]

[NOTE: The following exchange appears exclusively on the VHS Tape]

Coming Out of Their Shells/Gallery