"Cockroach Terminator" is the eighteenth episode of the 2012 TV series. It first aired on March 15th, 2013.

As the Turtles try to foil a Kraang invasion plot, they are hunted by a giant, and indestructible, mutant cockroach.

Whilst Leo, Mikey, and Raph are eating some instant ramen in the kitchen, a little cockroach crawls around on the table. First, it goes to Leo, then to Mikey, but when it goes on Raph, then later panics... Raph then grabs hold of his sai and immediately tries to kill the innocent cockroach, until Donnie comes up and stops him. He explains that this particular roach is special because he outfitted it with a minuscule spy camera so that it can successfully wander into TCRI and spy on The Kraang for them. He then plays the recording that the roach got from where Raph gets quite scared, so Mikey asks Donnie to do it again just to annoy Raph - and to get a good laugh. Donnie then brags that they are going to spy on an advanced inter-dimensional alien race -- just using one simple cockroach.

Later, the Turtles are seen in The Shellraiser watching the roach spy on The Kraang, until they hear that two Kraang are talking among one another. They zoom in to hear that they are going to try and bore a giant hole in the Earth's crust (ultimately going into the Earth's core), and that they are going to need to steal a very specific type of diamond lens for it. When the roach soon falls into a large vat of Mutagen, the signal is then lost...The Turtles are soon to find out that it destroyed all of The Kraang within the vicinity and then broke outside, spotting the Shellraiser.

Meanwhile, inside the Shellraiser, Donnie has a blurry vision on his phone of where the lens is apparently located (within a lab)... Just as they start to drive away, they run over something pretty big. The Turtles get out to see what they hit, and Donnie quickly recognizes it as a mutated version of his spy-roach, quite intrigued by the discovery of organic and mechanical matter managing to fuse. Just when Mikey starts to tease Raph about his paralyzing fear, the spy-roach immediately rises up and grabs Donnie, but it then sees Raph and decides to go after him instead.... Leo, Donnie, and Mikey all attack at once, but the Spy-Roach is strong enough to just keep walking, unimpeded. Raph then tries to hit the roach with manhole covers (fired out of the Shellraiser), but misses, until he actually hits the insect with one of them... The nanosecond he sees the roach twitch a little, he freaks out yet again and starts shooting a dozen more - until Leo calms him down and he throws one more, but they all suddenly remember that they have to prevent The Kraang from getting their hands on the piece of machinery at all costs - and Raph then sees that the roach has disappeared, so they are forced to leave instantly.

Meanwhile, the Kraang have just found the lens earlier than expected, and, the four Turtles then appear on the scene as well and use their own van to knock the Kraang's van over, so then the human-disguised Kraang come out and a large fight breaks out, until a "resurrected" Spy-Roach jumps in out of nowhere and easily takes out the few remaining Kraang, and Raph then takes cover behind the Shellraiser, while Leo desperately looks for him....While all of this happens, the Kraang unfortunately get the lens in their own possession. Spy-Roach soon finds Raph, but before he can attack him, Mikey and Donnie arrive to fight the beast, so Mikey utilizes a can of spray that he happened to have on him (miraculously)...They then begin to take him down and it actually does become quite weakened - That is, until, Mikey runs out of the spray and Spy-Roach then aims one of the Kraang's guns at the both of them and is about to open fire, but the insect ultimately gets hit by a tanker truck passing by at quite a high rate of speed.....Then, the driver spots it and is extremely appalled, so he chooses to roll out of the vehicle, causing the truck to go wild and explode against a nearby garage door. After all of this overwhelming fracas, the Turtles make haste and leave (to halt the Kraang, for the most part), under the notion that Spy-Roach is now dead for good...Before the cops arrive, however, the Spy-Roach casually walks out - revealed to be completely ALIVE!!!!

Meanwhile, in the Shellraiser, Leo criticizes Raph for his utter cowardice...Raph does admit that he hates his phobia and that he needs to somehow get over it...Donnie the informs his brothers where the Kraang would probably choose and attempt to drill into Manhattan. The Roach is then seen in the sewers, being able to look for the van with the homing signal that Donnie installed in the camera...The brothers are then soon to find out that the reason Raph is the Spy-Roache's very target is because, earlier that night, he tried to kill him. The roach then latches onto the Shellraiser (after the vehicle happens to pass over a sewer lid) and it begins to slowly saw it's way inside. Afterward, while Donnie is quickly fixing up the Shellraiser (which is now battered), Leo uses Raph as bait to get to the villain...The guys soon rush off, but Leo and Mikey get utterly beaten up, leaving poor Raph to fend for himself...In an alley way, Raph pleads for mercy. A mysterious voice then tells him to be good to Mikey and let him read some of Raph's comics once in a while. Raph turns around and sees that the voice is coming from none other than Mikey, which, of course, makes Raph very angry. Leo then joins them as well, but they all soon discover that Spy-Roach has molted. Now, it's even bigger and scarier (and grosser), and has the capacity to fly.

The Turtles quickly haul into their van and decide that they have to drive to the Kraang facility (as the laters have already begun the drilling process), when Mikey gets grabbed and taken out by the roach...Thus, Raph is 'forced' to go after the Spy-Roach with the Stealth Bike. While the tables are soon turned and Raph is chased (and attacked), the other Turtles try to get into the facility with desperation, which they do end up narrowly accomplishing, but the van gets completely stuck in the closing doors as well...Raph is then forced to deal with both the alien robots and the cockroach on his VERY OWN. So, he reluctantly accepts this as a fact and motorcycles directly into the facility (He is actually able to drive over the roach and into the center of the building, though he finds that this endeavor is quite painful). Raph then battles the roach once more and is actually able to "drill" the roach with the Kraang's gargantuan weapon, until the insect explodes into nothing but a pile of white goo, and at the same time, the drill is obliterated. However, as the Turtles leave, a brand new embryo forms on the ground as a slight foreboding.

In the lair, Raph brags about how he has utterly conquered his fear of the roaches. However, Mikey is quick to test this out by saying that he had just slipped one right into his shell. This freaks Raph out and sends him running in fear practically all over the place, with his brothers erupting in shrieks of laughter, ending the episode.

Raphael: "Cockroach? Why did it have to be a cockroach?"

Leonardo: "What is that?"

Leonardo: "Raph lost it. Raph, where were you?"

Leonardo: "Busy cowering in terror! We gotta' find the drill before the Kraang cracks open Manhattan like an egg!"

Raphael:  (Chong starts drilling into the Shellraiser) "What's that sound?"

Donatello: "I don't see anything outside. Uh oh, he's back!"

Raphael: (panics) "What?! Where?! Where the heck is he?! He's underneath the van! (He hops onto Donnie) HE'S UNDERNEATH THE VAN!!! (Chong cuts the drive shaft, in order to make the Shellraiser stop) He cut the drive shaft?!" (Donnie pushes him back into his seat)

Leonardo: "How does he keep finding us?"

Donatello: "Hmm... Well, he could be using the homing signal I set up so Spy-Roach could find its way back to the van."

Michelangelo: "Dude, even I would've turned that off."

Donatello: "Excuse me, Mikey. I've been a little distracted. Maybe I could tap into his camera to see what he's seeing."

Raphael: "None of this makes sense. Why is he so mad at us?"

Donatello: "And... got it." (Chong's camera shows Raph trying to kill him before he got mutated).

Michelangelo: "Wow, that stinks for somebody who's afraid of roaches."

Raphael:  "Irony, got it thanks! So are there any more surprises?" (Chong drills through the Shellraiser) "He has a saw?! The cockroach has a saw!" (Leo cuts the saw from Chong's grip)

Leonardo: "Not anymore! Donnie, the rest of us will keep the roach busy."

Leonardo: "Yes!" (to Donnie) "You gotta fix the Shellraiser fast!" (they start leaving the Shellraiser) "Like yesterday fast!" (He drags Raph outside, and he's sitting and cowering) "Hey Spy-Roach, Raph's out here! Come and get him!"

Raphael: "Really? You're using me as bait?"

Raphael: (on his knees, closing his eyes and cowering fear, presuming Chong is behind him) "I'm sorry I tried to smash you OK? I'm sorry! I learned a very important lesson, I'll never be cruel again, just leave me alone!"

Michelangelo: (in different voice) "On one condition..."

Michelangelo: (in different voice) "Let him read your comics once in a while." (Raph turns around)

Raphael: "MIKEY!!!!" (kicks him in the shell and tries to grab him, but Leo stops him)

Michelangelo: "OW!!! So much for learning your lesson!"

(Chong opens the top hatch to the Shellraiser and grabs Mikey)

Donatello: "It's got Mikey!"

Leonardo: "We gotta' do something!" (Raph stares into deep thought for about a minute)

Leonardo: "You don't have to do this just to prove you're not afraid."

Raphael: "I am afraid. And that's why I gotta do this." (he opens a lower door) "I'm coming Mikey! No 6-foot tall cockroach is gonna eat my brother!"

Leonardo: "Well Raph, you faced your fear and saved the city. Not bad for a Wednesday."

Raphael: "Faced my fear? I conquered my fear!" (grabs Mikey) "I looked my fear in the eye, and I zapped it to oblivion!" (drops Mikey and he gets back up)

Michelangelo: "So you're not afraid of cockroaches anymore, huh?"

Michelangelo: "Good, good. Then you won't mind the one I just slipped into your shell." (Raph stares in disgust for a few moments, and then running around the room panicking while the others start laughing at him as the episode ends).

Kraang: "The halting of Kraang is not a thing that the ones who are Turtles will be doing to Kraang!"

Leonardo: "Wrong, the halting of Kraang is exactly the thing that the one who are- OH, JUST HALT!"

Donatello: "Which do we save first, the world or the English language?"

Kraang: "Kraang has been on the diet known as gluten-free. Kraang has already lost 13 Kraang units of weight." 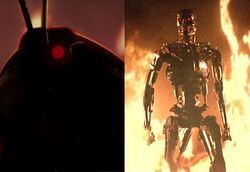