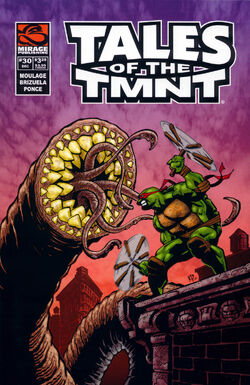 Circle of Darkness is issue #30 of Tales of the TMNT volume 2, published on December 2006 by Mirage Studios. It contains a backup story, The Mother of All Anger.

Inside an old church, Michelangelo ambushes a trio of Nazi scientists using high tech equipment to create some sort of deadly gas. This reminds Mikey of a story that he also considers to be a "gas"...

As a blind man crosses the street, he fails to notice a truck careening his way. Mikey swoops in just in the nick of time and shoves the old blind man out of the way. The blind man thanks Mikey profusely and, thinking the turtle to be homeless, offers him a room at the Arrowhead Home for the Blind on West Twenty-Fourth. Pouncing on the opportunity to get the privacy needed to work on the book he's been dreaming of writing, Mikey accepts and lets the room for a few weeks (much to Leo's disapproval). Only a few days into his project, Mikey finds it hard to focus.

There's one neighbor in upper floor of his building; a blind man with a seeing-eye dog who is constantly going inand out of the building in the dead of night. Mikey finds his activity suspicious, but tries to write anyway. After some research, he decides to set his story in the mid-nineteenth century, at a bar called McSorley's Ale House. As soon as he selects the setting, however, he has a change of heart and decides to move the timeframe to the 1950s and the location to a bar called the White Horse Tavern. As Mikey struggles with his creativity, he notices the strange blind man intruding upon the story. Returning to reality, Mikey peeks out his door and sees the blind man leaving at 11:58pm carrying a book that looks far too ancient to be in Braille. Wondering what a blind man would be doing with a book, Mikey follows him to Madison Square Park. Peeking through the bushes, he sees the blind man reading. Suddenly, the scene changes and the blind man, now dressed in a toga, is lying on the ground with his head on backward. Even stranger, the clock on the nearby Metlife Building appears to be ticking backward. Mikey suddenly awakens in his room at midnight. Peeking out the door, he sees the blind man carrying a book.

Wondering what he could be doing with a book, Mikey follows. On the way, he passes the spot where the home of Herman Melville once stood, not far from the Arrowhead Home. Scaling a building that overlooks Madison Square Park, Mikey spots the blind man, now wearing a toga, reading from the ancient tome and hovering in mid air. There's an earthquake and a humongous worm bursts from the ground. The worm introduces itself as Ouroboros and demands to know who has summoned him. The blind man says he is the prophet Tiresias and he wishes to strike a bargain to remove his curse of immortality. Tiresias has had a vision of an event that will take hundreds of thousands of lives. In exchange for his own death, he will cast a spell that will bind those doomed souls to the White Worm.

Ouroboros accepts and Tiresias enters the worm's mouth. Mikey suddenly wakes up in his room after hearing the strange blind man descend the staircase. Feeling a weird sense of déjà vu, Mikey decides to get to the bottom of things and sneaks into the blind man's room. He finds a photograph of the blind man with Herman Melville, which should be impossible. Even stranger, he finds the book the blind man was carrying in his dreams: "De Vermis Mysteries" by Ludvig Prinn. Knowing something is very wrong, Mikey goes to warn the other tenants of the Home. Not only does he find each room empty, but he finds that each room hasn't been occupied for years; he'd been alone in the building the entire time. As he sits on his bed trying to figure things out, Mikey is approached by the blind man. Tiresias reveals that everything Mikey has experienced has been an illusion. The setting then changes to Madison Square Park and Tiresias appears in his true form; a man in a toga with his head on backward. Tiresias explains that part of his curse is to always see where he has been, but never where he's going. Mikey gets ready to fight, but Tiresias says that after his sacrifice, his curse will be lifted. A beam of energy then paralyzes Mikey and he finds himself back in his room at the Home. Mikey passes out.

Shortly afterward, Mikey is woken up by Raph. Don is testing the old abandoned room for carbon monoxide and finds that the place is filled with deadly levels of the stuff. Mikey struggles, trying to relate his story of the sorcerer and the White Worm and how they have to stop him. Leonardo tells Mikey that he's been hallucinating. While saving the blind man from the truck, he was hit in the head by the fender. Suffering from a concussion, he crawled into the abandoned building on West Twenty-Fourth and has been unconscious for days. If the turtles hadn't tracked him down, he would have been killed by carbon monoxide poisoning.

As Raph and Don carry the unconscious Mikey out of the building, Leo feels compelled to search an upstairs room. Inside, he finds the skeletal remains of a seeing-eye dog as well as an old book: "De Vermis Mysteriis" by Ludvig Prinn. Leo suddenly finds that he doesn't know quite what to believe.

Frontispiece.
Add a photo to this gallery
Retrieved from "https://turtlepedia.fandom.com/wiki/Circle_of_Darkness?oldid=539043"
Community content is available under CC-BY-SA unless otherwise noted.