Chung I is Venus' adopted father in Ninja Turtles: The Next Mutation.

He found her swimming around in a drainage ditch when he was in New York and took her back to China with him. He trained her in the shinobi arts. He would travel to the Realm of Dreams to meditate and talk to Splinter. He died after confronting Dragon Lord and demanding Dragon Lord release Splinter. In his dying words, he tells his adopted daughter to go to New York. 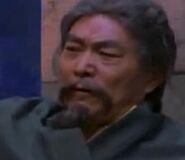 Add a photo to this gallery
Retrieved from "https://turtlepedia.fandom.com/wiki/Chung_I?oldid=456890"
Community content is available under CC-BY-SA unless otherwise noted.